Kiev in late Autumn. It wasn’t my first choice of holiday. Many countries have crossed my mind before I booked my flight to Kiev, with a return flight from Chisinau, Moldova.

So why did I choose Ukraine?

Since 2014 my brother Anton has a girlfriend (Daryna) from Kiev, Ukraine. He is traveling to Ukraine every few months.
When I was struggling to make a decision on my upcoming trip, which had to be cheap and the flight should be short, my brother joked I could visit them in Ukraine.

On internet I found a relatively cheap flight. There are no budget airlines flying to Ukraine, but I found the price acceptable.

I only had 3 weeks to plan my trip. And I didn’t know anything about these countries. I have seen the movie Winter on fire, a documentary movie about the fight for freedom in 2014. How a demonstration can go so wrong!

Now it is safe again, only some parts in the East, next to Russia are in conflict.

I choose on purpose not only to spend my days in Ukraine, but go to the unknown land of Transnistria and visited the less touristy Moldova. I’m sure I’ll visit Ukraine on another trip, so I can visit other places. 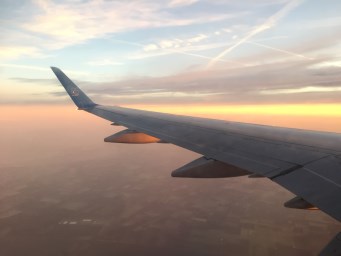 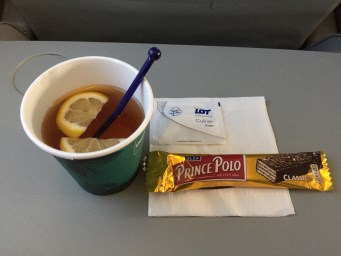 My flight with LOT airlines wasn’t too comfortable. Somehow I got motion sick again and I had to struggle myself trough the last hour of flight.

Daryna made a reservation for a bus ticket from the airport Kiev to downtown city. The bus ride would take about an hour. 15 minutes on the bus and I felt horrible. My motion sickness strikes me again. I had to hold myself together. The last part of the trip I just tried not to vomit, but it was inevitable. Luckily I took some of those motion sickness bags from the plane.

I felt better than soon as I got out of the bus at the main train station. Here, I waited for my brother Anton and his girlfriend Daryna. We drove together with her parents to their house in the eastern part of Kiev, next to a Forrest.

The apartment building had the looks of the Soviet buildings. But the interior of the apartment was cozy and comfortable. Still, trough my motion sickness I got a headache and I just didn’t feel very well. Daryna’s mother, Tamara, made a really nice dinner. I tried to eat, but I just had to lay down. I could rest a bit in Daryna’s room, which was comfortable. 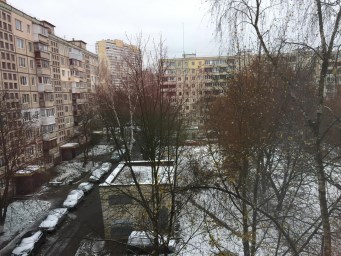 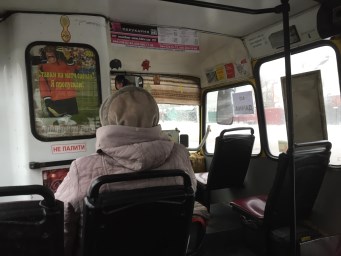 I had 4 days to explore Kiev. For Sunday I've booked a tour to Chernobyl. I wanted to know more of the history about this major disaster.
That left me with 3 days to explore the town.

As I arrived in the weekend, Daryna didn’t have to go to work. Anton and Daryna showed me around the first day. The weather was gray and it was already snowing when I woke up. The weather forcast told us it would be worse at the end of the day. Daryna’s parents didn’t want to walk in the snow so they decided to stay at home. 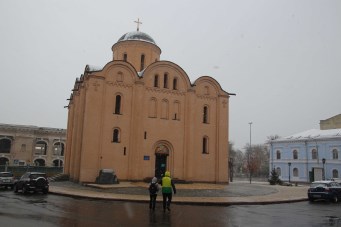 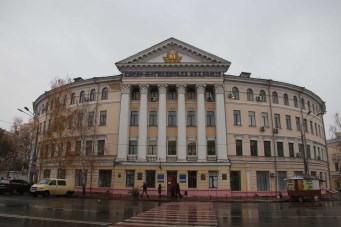 We concurred the snow and took a bus to the city center. We walked around all day to see churches, buildings, parks and a museum. Slowly the snow put a layer on the ground, which gave more atmosphere, but with that, the cold. It was about -2 degrees.
The churches had lots of details in the painting. Some had also some adding of gold. We didn’t enter all the buildings we have seen.

Walking around we passed trough some parks. Due to late Autumn, not all the leaves touched the ground yet. I loved to see the colorful leaves and I was amazed by the nice parks. 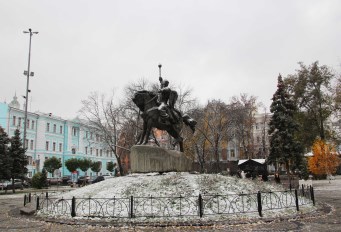 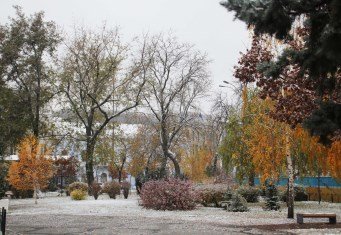 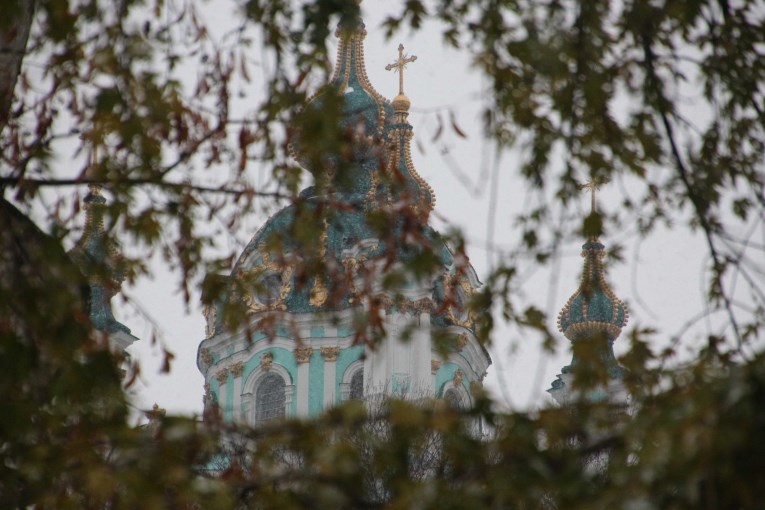 We ate in a buffet restaurant. You just choose what you would like to eat and then pay for it. The borsh soup I ate was lovely. In the shopping area we visited the chocolate shop Roshen. Walking inside the shop and you just get hungry! We bought a few chocolates to try. 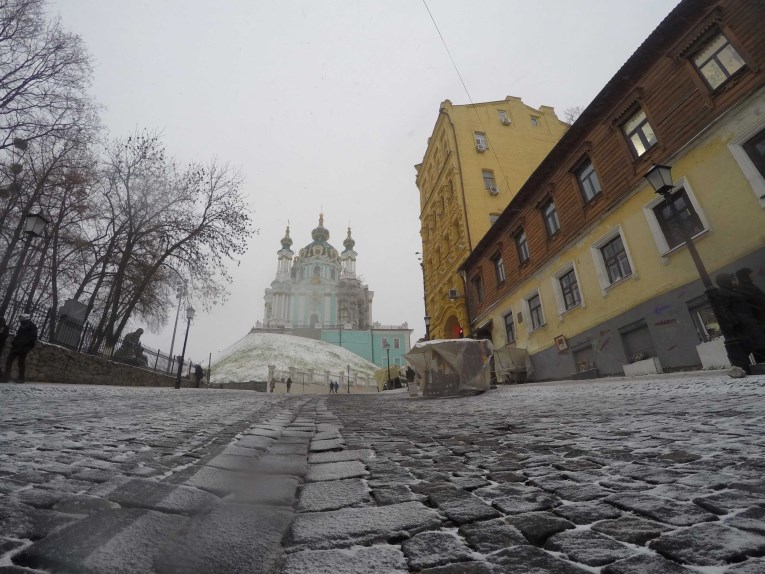 We tried to visit St. Michaels church. Snow was touching our faces and we just entered very quickly. The inside was warm and beautiful. It was very busy, people were praying and light candles. The small museum has some really nice pieces which belongs to the church. Worth to take a look around. 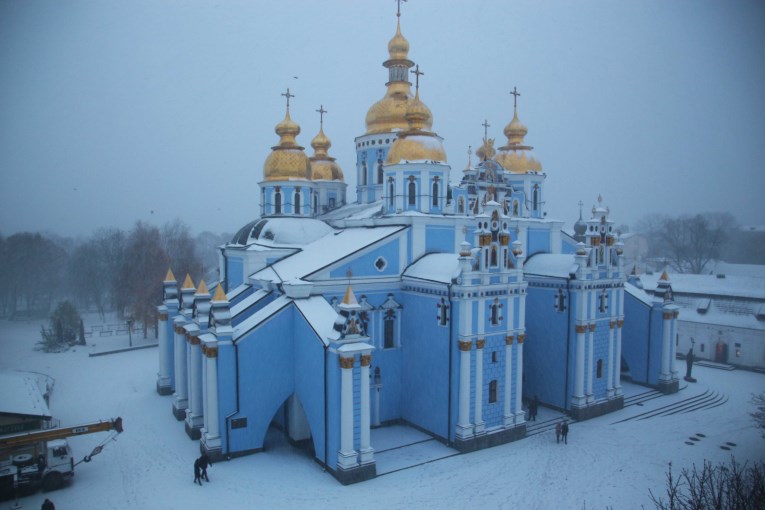 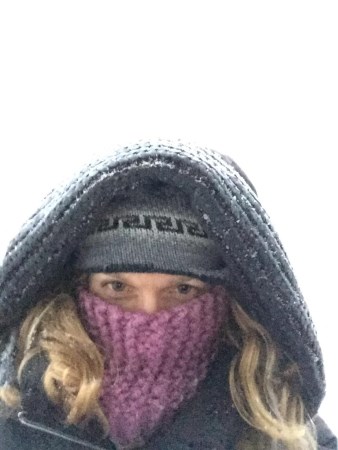 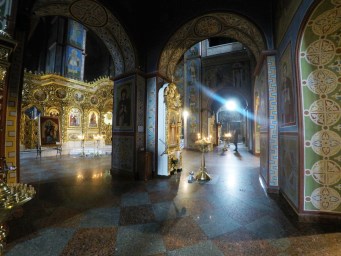 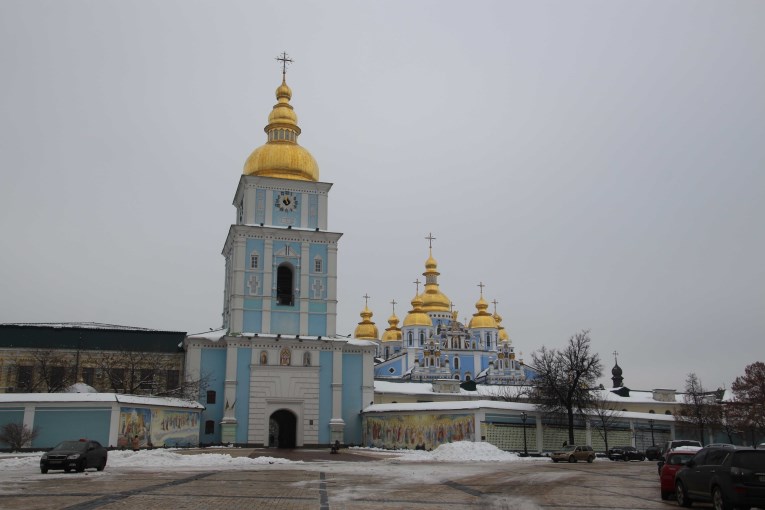 The Freedom square was covered in a thick layer of snow. They just started to clean the roads and in the dark hours of the day, with the lights from the shops and hotels, I think it looked kind of romantic. 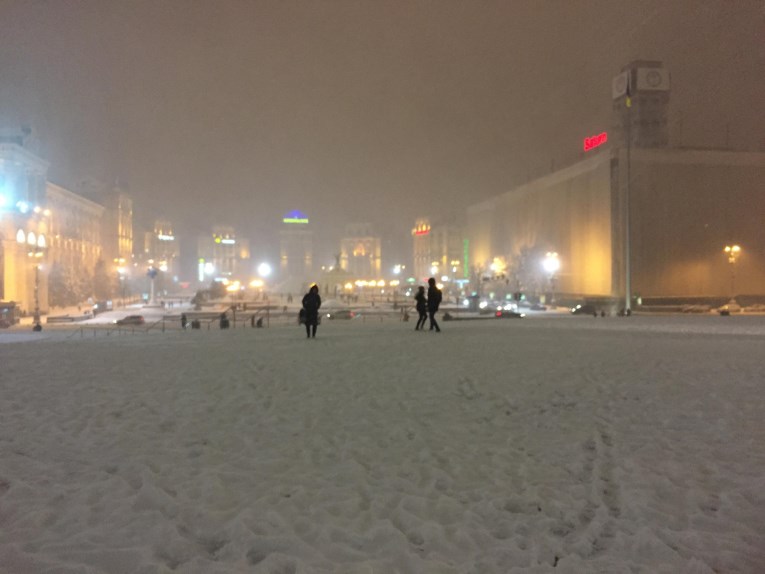 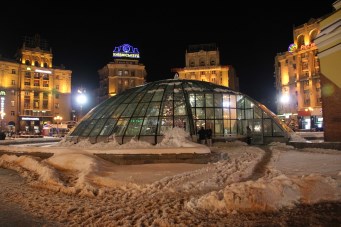 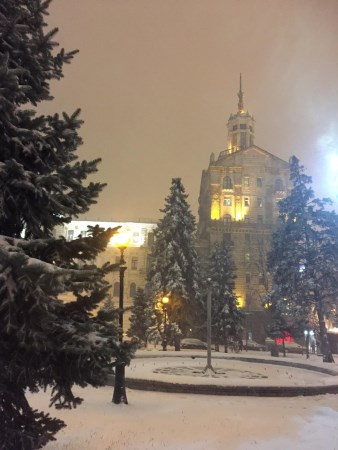 Another day I explored Kiev with Anton. Daryna needed to work. Luckily this day had a bright blue sky. Even it was still cold, the snow was cleaned from the streets, the city had a magical tough.

First we visit Lavra. Also, known as Monastery of the caves. It is a historic Orthodox Christian monastery which is on the list of UNESCO world heritage list. Just after we paid the entrance fee, which was cheap, the photography permit was expensive, I could totally see why this monastery is on this list. It originates from 1051 when the first monk came to this area. There are many buildings to discover on this site. The most churches are white with green rooftops. And a lot of golden adding. The inside has a Barok interior, again with a lot of golden details. The walls and ceilings are covered with detailed paintings. Unfortunately inside the most buildings you are not allowed to take pictures. 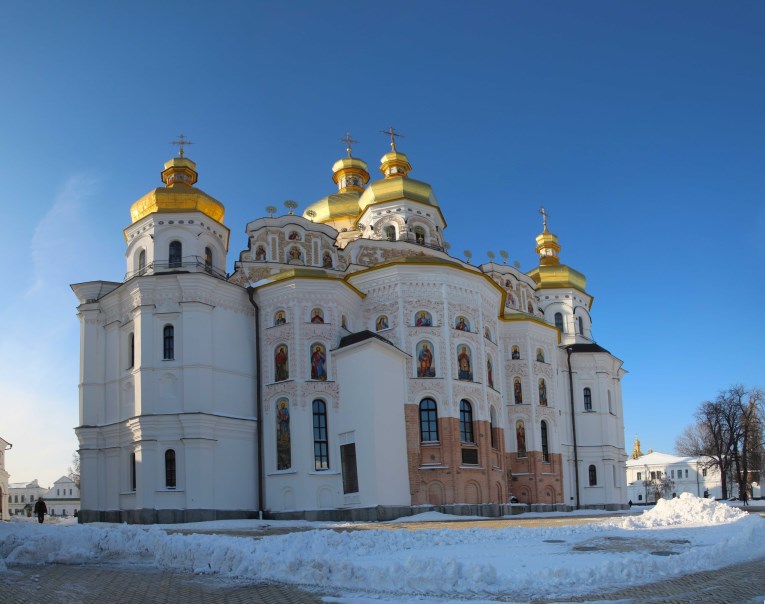 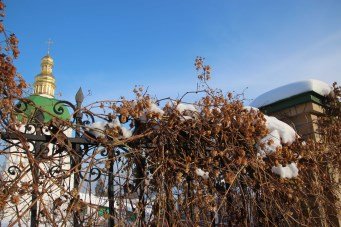 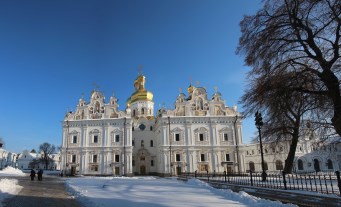 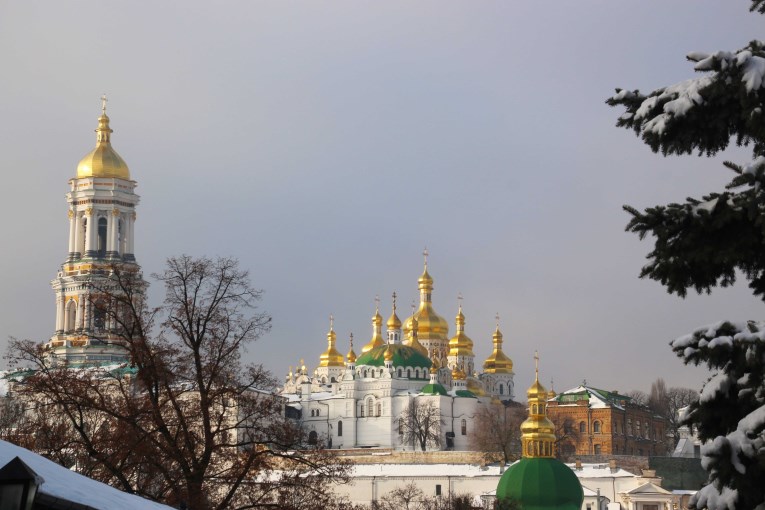 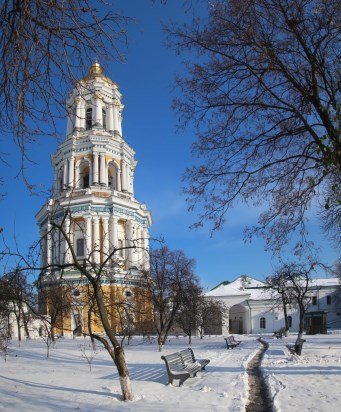 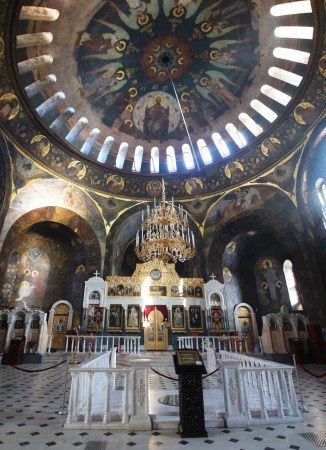 Very impressive were the caves. First the monks would live in the cave systems, but soon they started to bury dead settlers of the monastery. You can visit those caves on your own, but woman have to cover their heads. You can see coffins with covers from glass. They put a cloth on the bodies, but sometimes you can see a skeleton hand. The caves were small and with dead so close, I found it a little lugubrious. 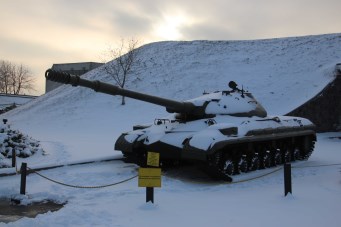 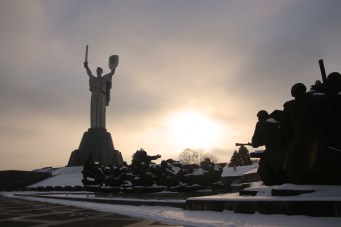 We walked around here half a day and still we didn’t saw all the site. But I wanted to see more of the city with the sunshine.
We passed quickly some memorials of the wars, took a quick look at the Golden gate from the outside and now took our changes to visit Saint Sophia’s cathedral. The architecture of the white with green and golden rooftops was just beautiful.

Saint Sophia’s cathedral had beautiful paintings on the wall. They are restoring it, but it is not yet finished. I loved every detail of this church. They had one specific item which was made by an artist. They made it with painted Easter eggs and it was formed as a woman painting. 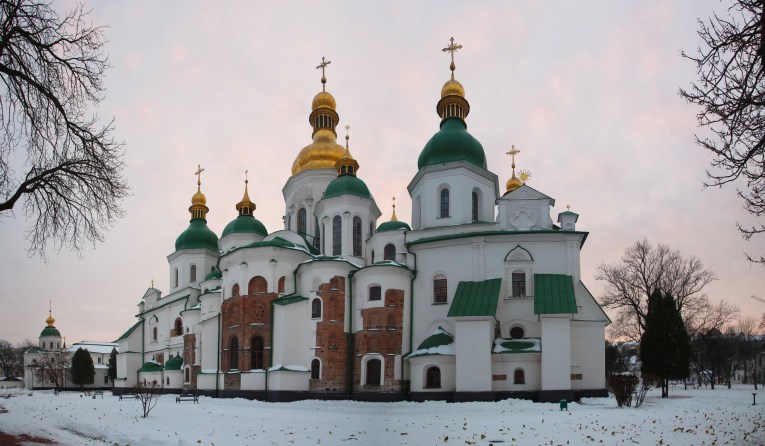 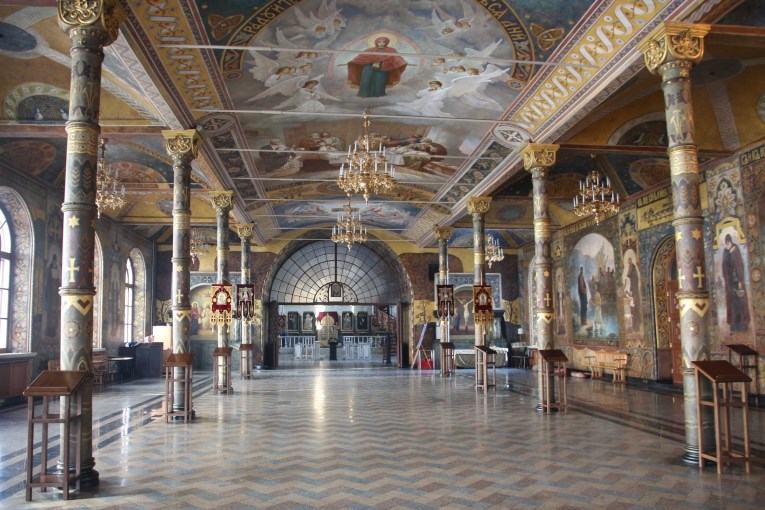 The last day of my visit I had to take a night train to Odessa at night together with my brother. This day I explored the town on my own. There were a few more churches which I loved to see and I wanted to visit a market. The market was bustling with people. The stands with vegetables and fruits were lush and colorful. 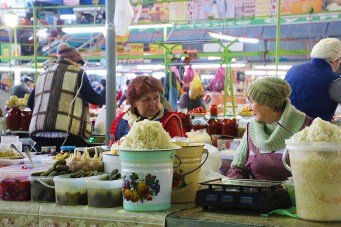 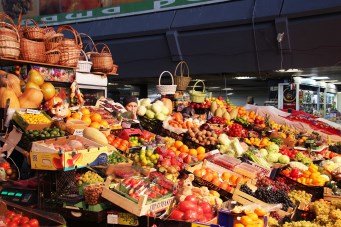 Again I visited St. Michaels, now I could pay more attention to the exterior of the building. I wanted to visit the tower again, but somehow I had to pay more than I visited it with Daryna and Anton. So I just skipped it.
St. Volodymyr’s Cathedral was again a building with a lot of nice paintings. People walked in and out to do their prayers.

I just wandered around until I had seen enough. At night I took a night train to Odessa.

What does Kiev cost?

Kiev is a cheap city for travelers. Since I stayed with family I don’t know about the hotel or hostel cost.

Taking a metro or a train will be cheap. You pay the same fare for one ride. (no matter if is a short or a long trip) One ride cost about 0.10 Euro. A lunch in a buffet restaurant cost me 1,50 Euro and as for a dinner about 2,50 Euro.

Most entrances to churches are free. You can put a donation or by some candles. Most UNESCO sites charge an entrance fee. With not even 1 Euro, this is cheap! But at some historical sites you have to pay for a photo permit which is about 8 Euros. But you can share it with other travelers, so one permit is enough.

Train tickets for about 10 hours are 10 Euros’s. 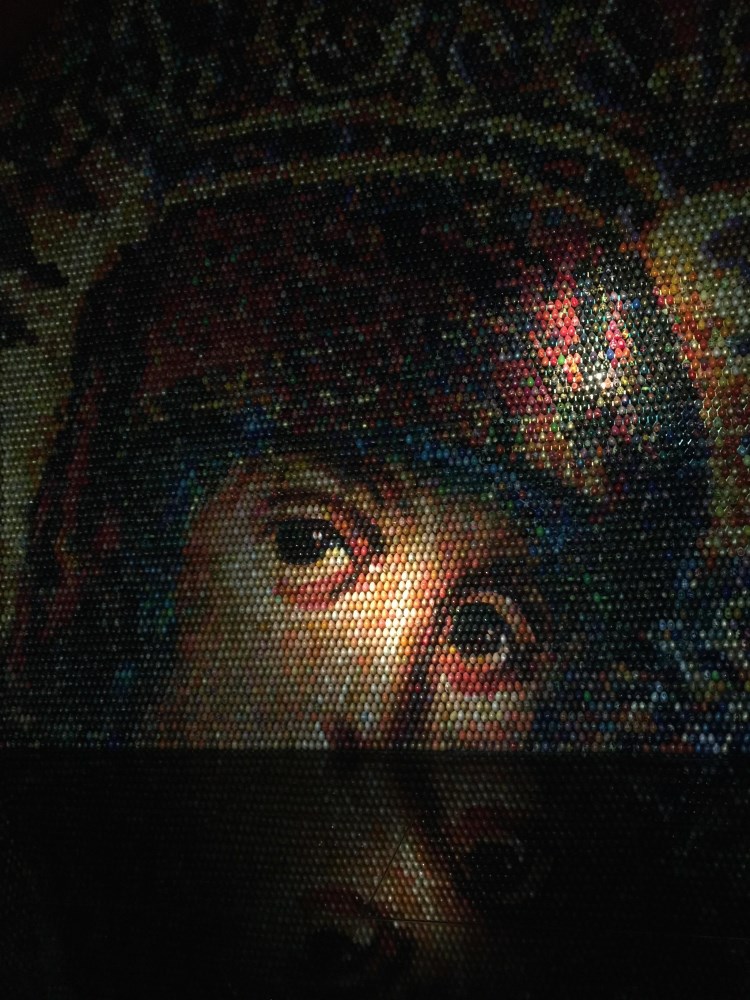 What do I think about Kiev after my trip?

First of all it was great to see my brother again and to meet with his girlfriend and her parents. It was a warm welcome and I felt at home immediately. Since this was my major goal of this trip, to see the city where Daryna lives and where my brother spend so much time, I was already happy to be here. Thank you for having me!

At first I thought most of the city is dark and gray, with only a hand full of nice buildings. But after my visit to Georgia and Armenia, just one month after that trip, I think Kiev has many nice churches. Lovely details on the paintings and they paid much attention to the decoration of the churches. The historical part is small, but enough to keep you busy a few days. Mostly I do not like to compare one city to another, but I guess I just needed it on this trip.

Now, I’m more curious to other cities and I would definitely come back!

Do you need more information about traveling in Ukraine? Lena is a woman from Ukraine and she wrote an awesome travel guide about Urkaine. Insane Ukraine: Your Guide To Hassle Free Travel. You can order the travel guide here.