After I booked my flight to Kiev in Ukraine one thing was clear to me; I wanted to visit Chernobyl.
A ghost town, is what they call it.
People think it is dangerous. How does this place looks like 30 years after the disaster? I wanted to see the effect of a disaster with my own eyes. How can it happen? How does it look like? Do people still live in that area? 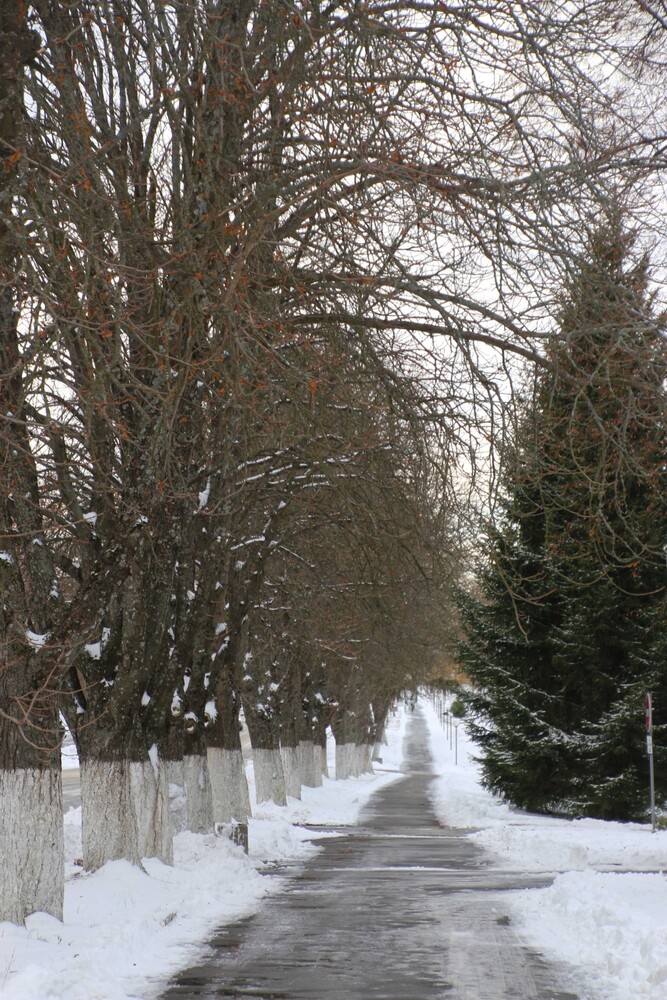 On 26 April 1986 a massive nuclear accident happened at Chernobyl nuclear power plant number 4. I was only 4 years old and I can’t remember this accident.

I cannot say much on how it happened, just because I don’t have the knowledge about it. There was a huge explosion after an experiment which went completely wrong. With this accident a huge cloud of radioactivity was released in the open space. The catastrophic accident killed 31 operators and firemen within a few days. The nearest city Pripyat got only evacuated 36 hours after the accident. They had to move about 135 000 people from the whole area of 30 kilometer radius. Now they call this area the Zone of Alienation or Chernobyl Exclusion zone.

Years after the accident there was a complete lock down on the area, due to high radiation. The area got looted, everything got poisoned from radiation. Only a few people would have returned and now live in this area. Nature took over the streets and houses. It’s almost deserted.

Chernobyl turned from a tragic disaster into a tourist attraction. 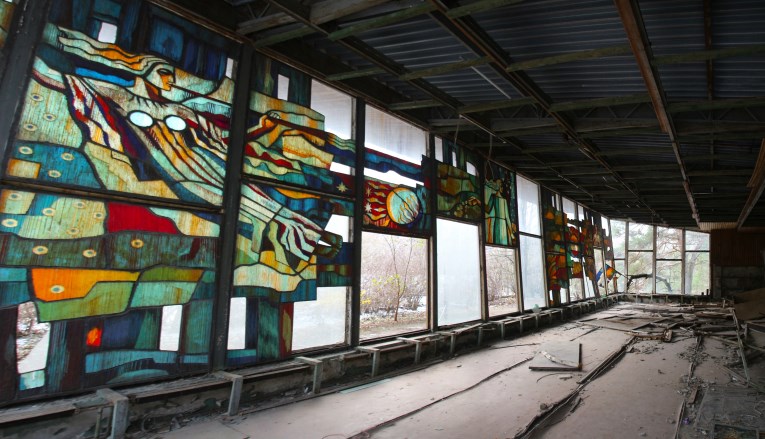 If you follow some simple rules, you can visit Chernobyl and Pripyat with a one day tour or multiple day tours. I booked a day tour with Solo east travel. You have to book the tour at least one week in advance, because they have to arrange a permit. It can be easily arranged online.

Since it was off season I had to pay 110 dollars, which includes a 10 dollar insurance. But I read on internet this price can go up to 170 dollars!
An other tour company which includes tours to Chernobyl is Chernobyl-city. They offer the same rate. You can find detailed information on their website about Chernobyl. 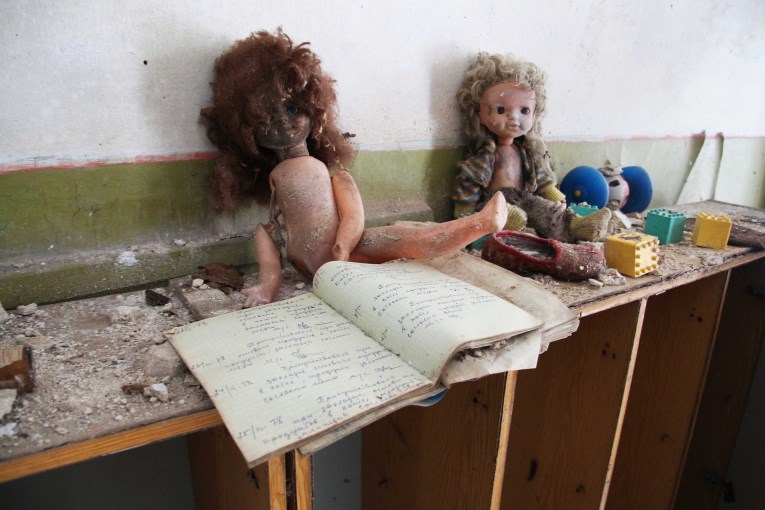 A few days after I have booked my tour, I got an email that the schedule was changed because they were placing a new sarcophagus over the reactor 4. They were not allowed by the EU commission to get close to it. We could only see it from a distance and were not allowed to take pictures. 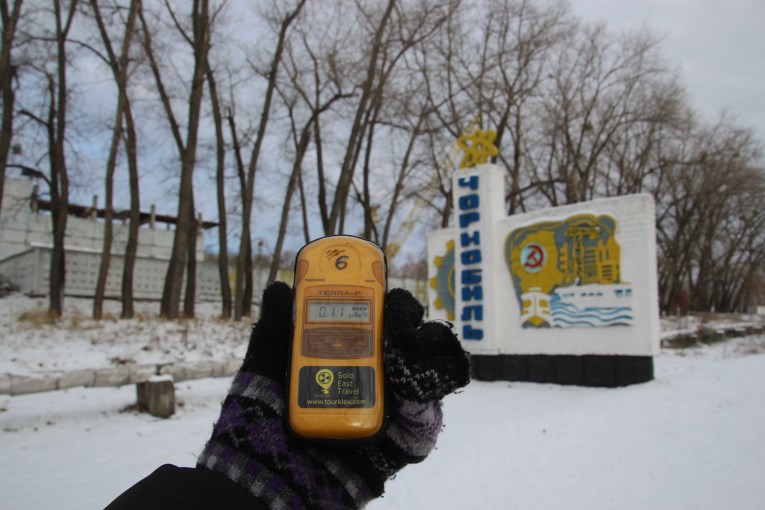 The tour started at 8 from a hotel at Maiden square. I was really late because of snowfall which cause traffic jams, but they waited for me after my phone call. Our group was small, with only 9 people. We had to drive 2 hours, before the first checkpoint. Here we had to show our passports.
In the bus they showed video’s about the history of Chernobyl. I found it informative.

Because it was November, there were no leaves on the trees. We could see deserted houses with broken windows just beside the roads. When the trees are in full bloom, you probably wouldn’t notice that many houses along the road in the Exclusion zone. 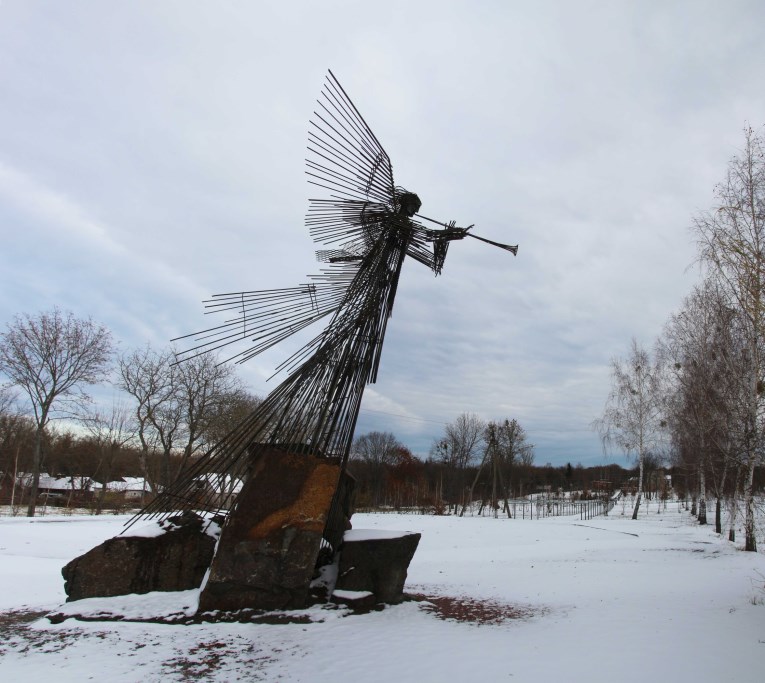 We stopped first in Chernobyl town to see some memorials and a church. Around noon we had our lunch, which was provided. This also included a juice and water. The food wasn’t too good, some baked potatoes and meat, which I didn’t like. The salad and fruit were nice. 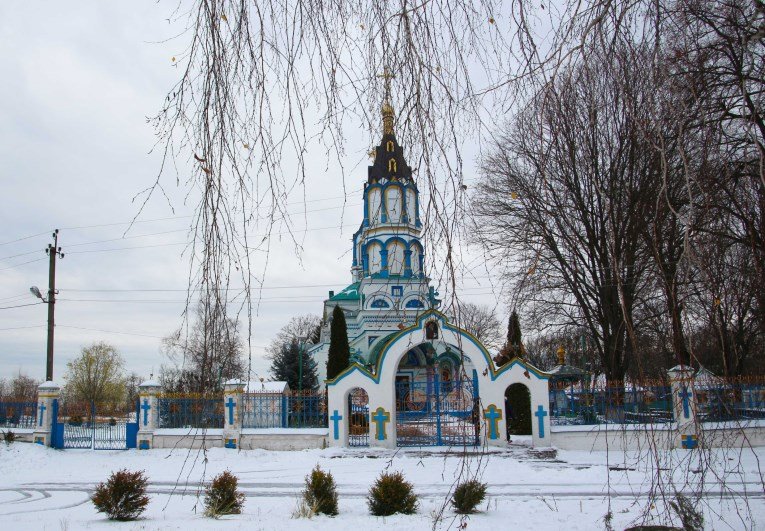 After the lunch, we continued to Duga-3 Array. A huge radar system which got the name Russian Woodpecker because of the ticking sound it produced while operating. This huge steel construction was only finished in 1985 and 2 years later it got shut down.

Standing in the snow, looking at this massive construction I could only think how they could hide such a huge, but top secret object. 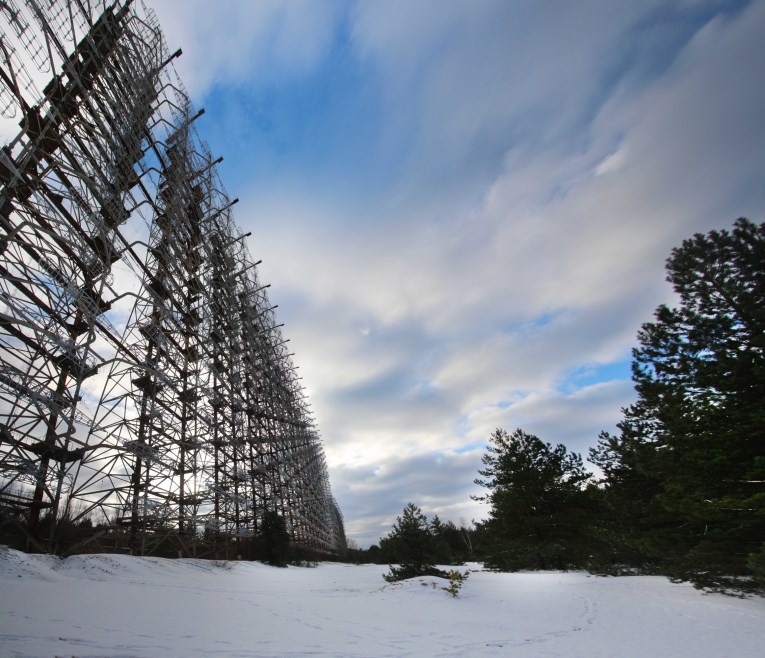 We continued to the kindergarten. Empty beds, children drawings and some left behind dolls only remembers the children who have played and learned here. 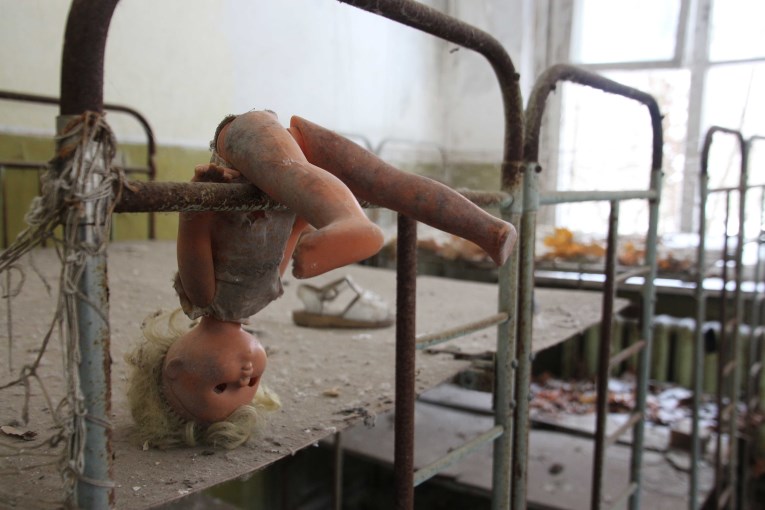 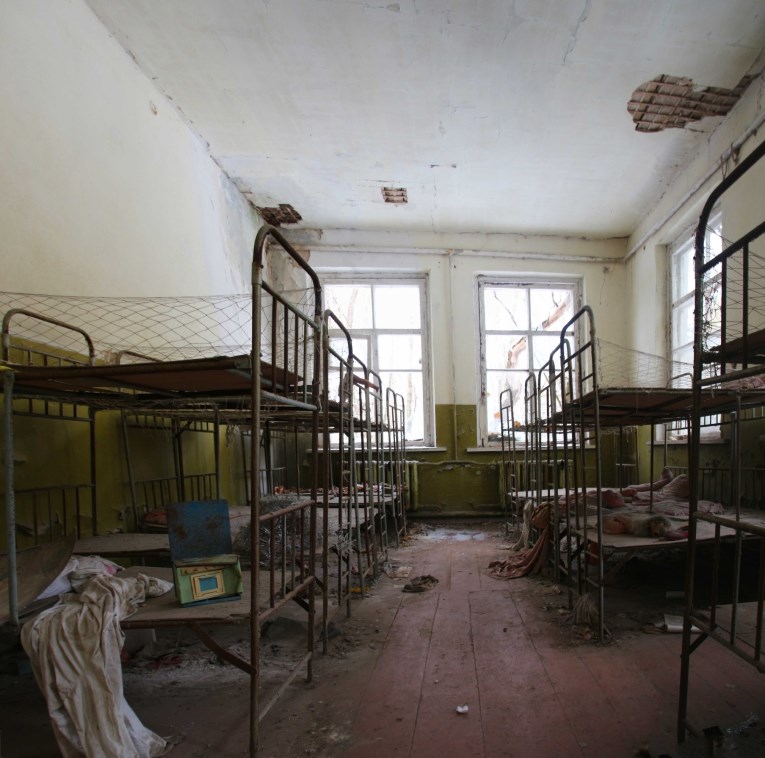 The Pripyat amusement park was about to be opened on 1st May 1986. The Ferris wheel never got spinning, the bumping cars never drove, it never got to amuse people. 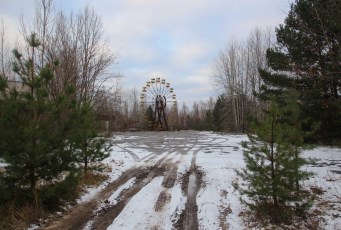 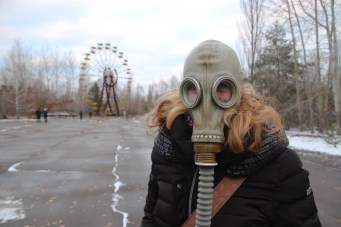 We continued to other buildings like a cafe with a view on a small lake. There were no tables to serve the people a nice cool beer, it only got a beautiful glass wall with a nice decoration in it. Half of it was destroyed. 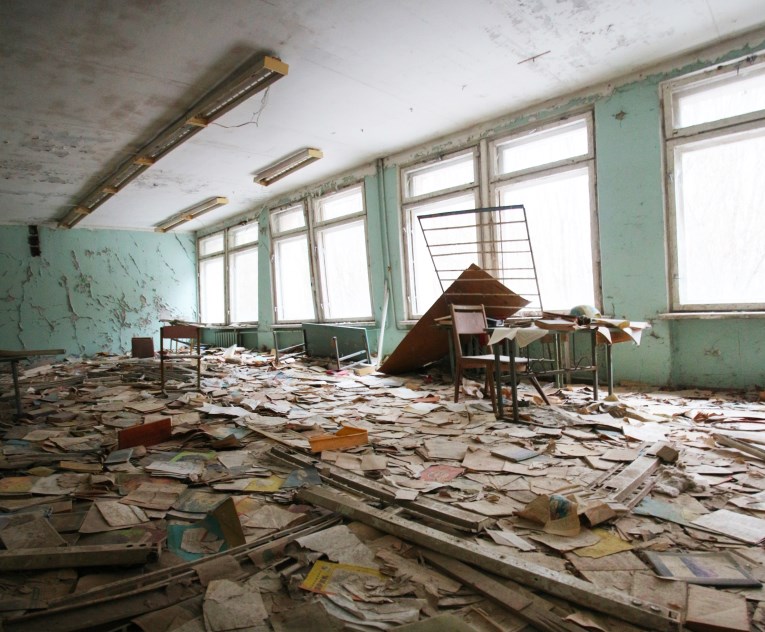 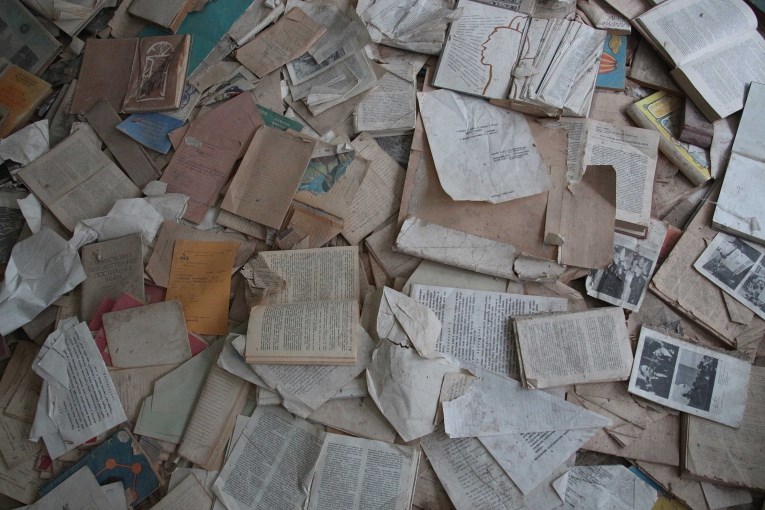 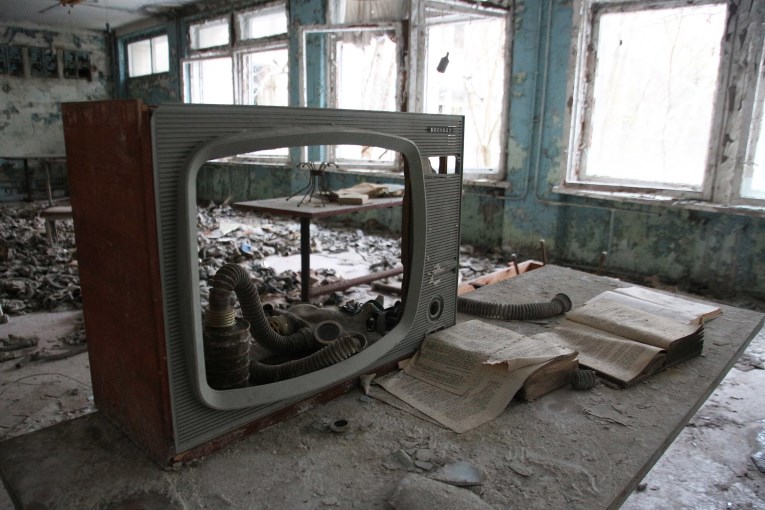 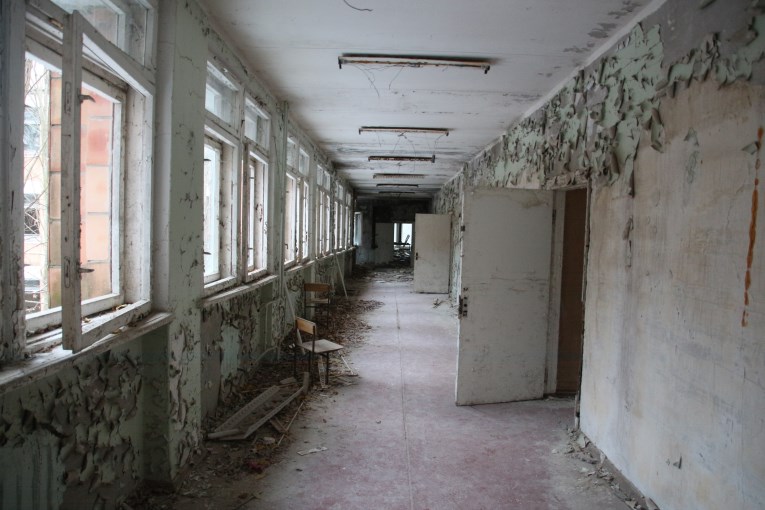 The school was something different. Books were thrown on the floor, a thick layer of what has been a good education was now waste and people trample it. Gas masks were left behind. Tables and chairs piled up and thrown away. 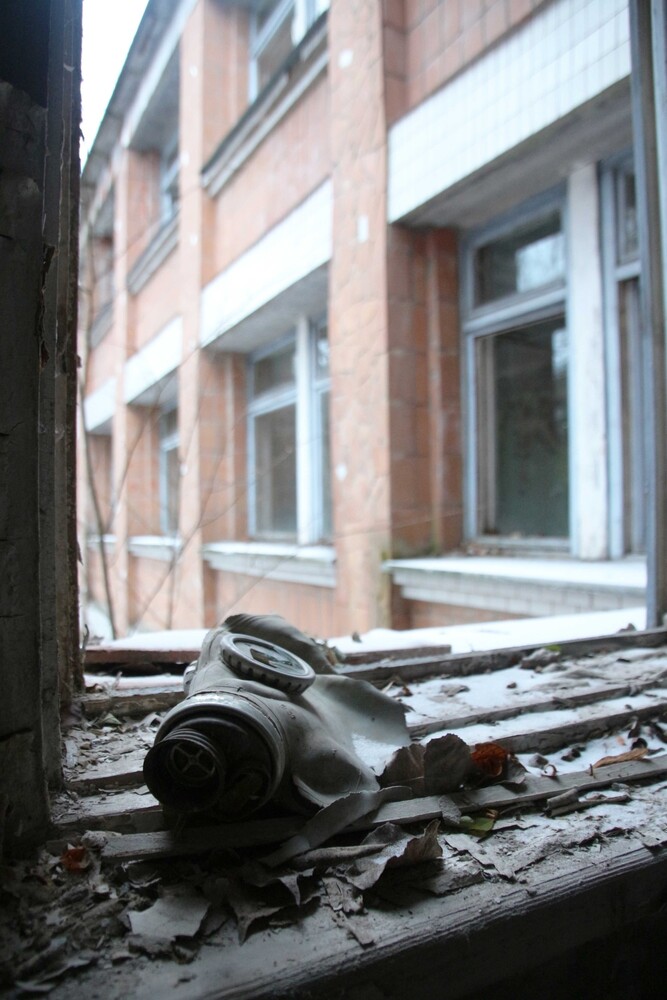 A huge swimming pool was empty and probably a lot of people had enjoyed themselves taking a swim.

After all those visits, it didn’t really felt like a ghost town. I could imagine people walking, learning, living here. And what they have had to left behind.

Cost: 110 Dollars including lunch (but this price can be different on daily base)