Two weeks holiday with my husband Timo. We decided to go to Switzerland and Italy to do klettersteig. Switzerland has some sights which I would love to see so, it would be a perfect combination. 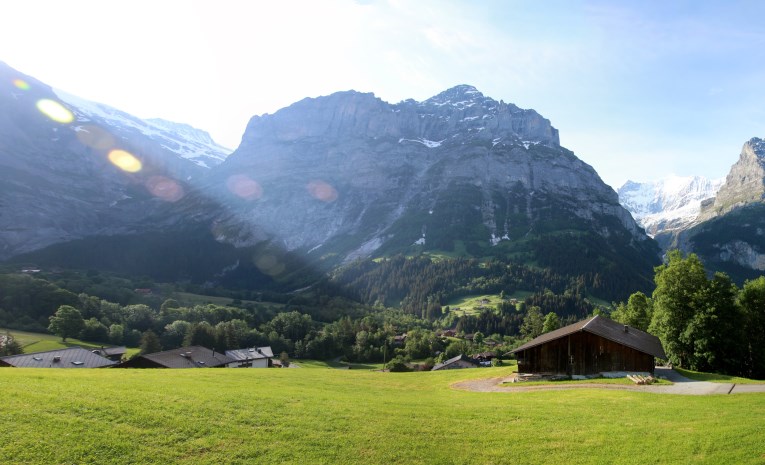 We settled in Grindelwald. The view from our hotel was superb! We could see a glacier and mountain tops. 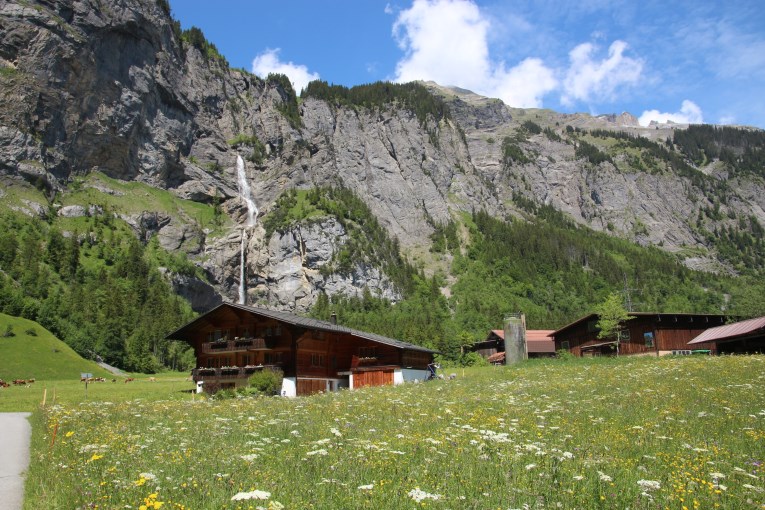 Around this village there should be a few klettersteig.

Unfortunately, there was only one klettersteig open at the beginning of June And it was 1.5 hours driving. The reason the other klettersteig were not opened was that there was too much snow on the routes or it was the birding season. The routes with a breading season for the birds will open at 15th of June. And the snow has to melt of course, before you can enter the other route. We were at the beginning of June, so only 2 weeks too early. 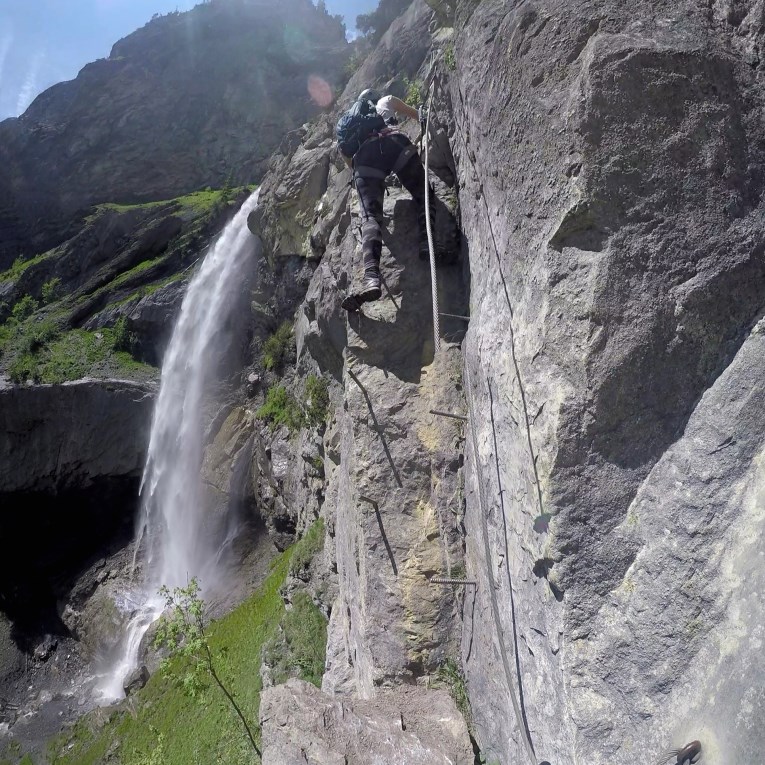 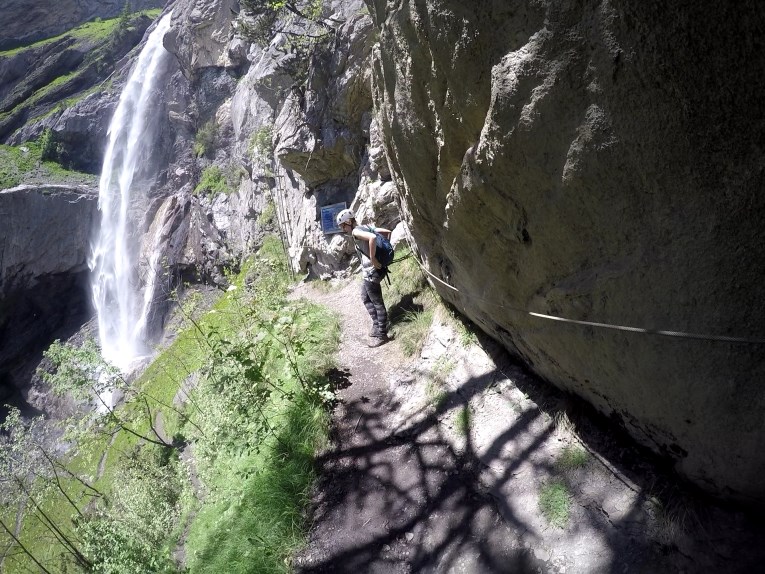 As klettersteig was the main reason to come, we decided to do the Allmenalp Kandersteg klettersteig. This route was the only one opened.

Parking was easy at the lift Kandersteg. We could see the full route. It looks really steep, and it is next to a waterfall. The waterfall looks impressive, as does the klettersteig. 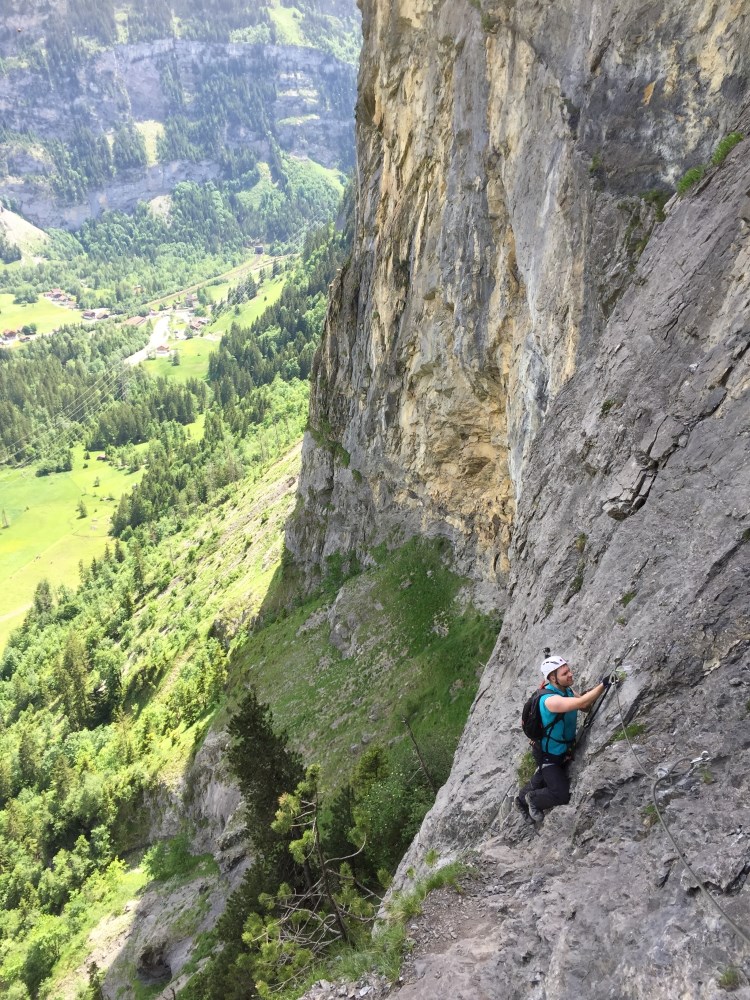 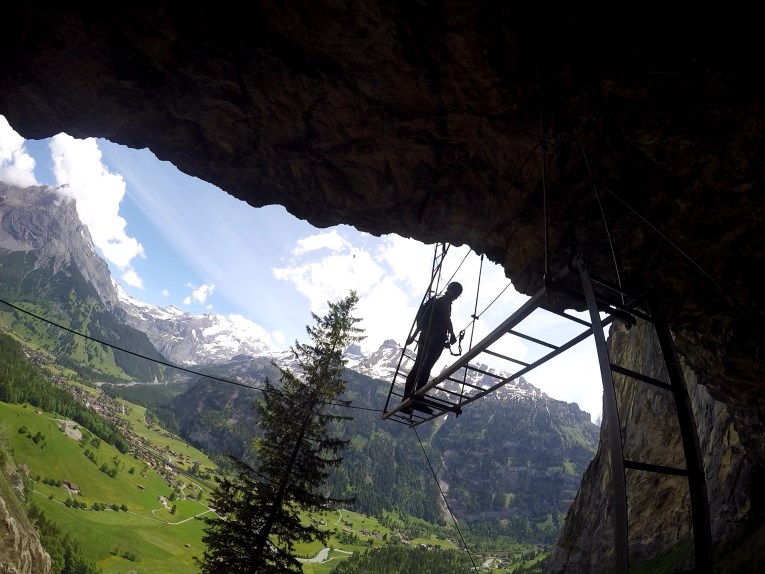 Anyway, we started to walk to the start point, which was only 10 minutes. We ate our lunch at the bench, before we started the big deal.

When we got the energy, we took off. This route has mostly nails attached to the walls. So you stand on them, and sometimes you can hold them. Most of the time there is nothing to hold onto, only rocks or the steel cable where you have to secure yourself with the klettersteig set. 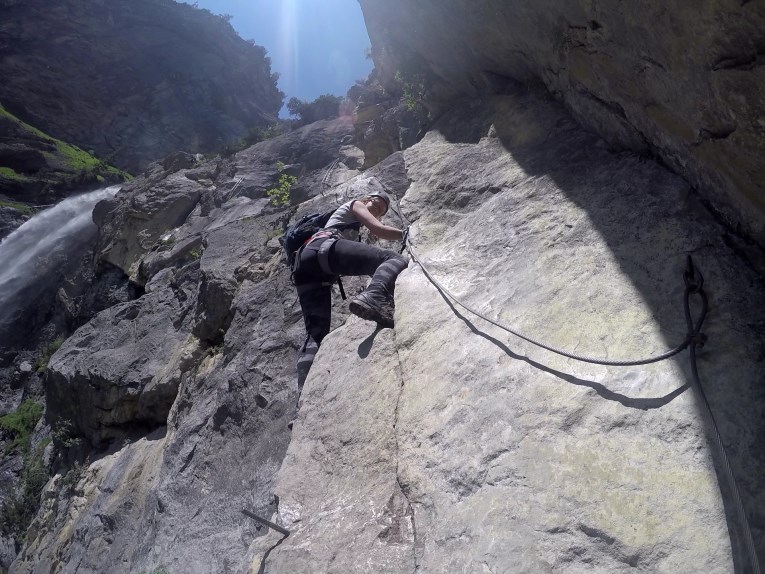 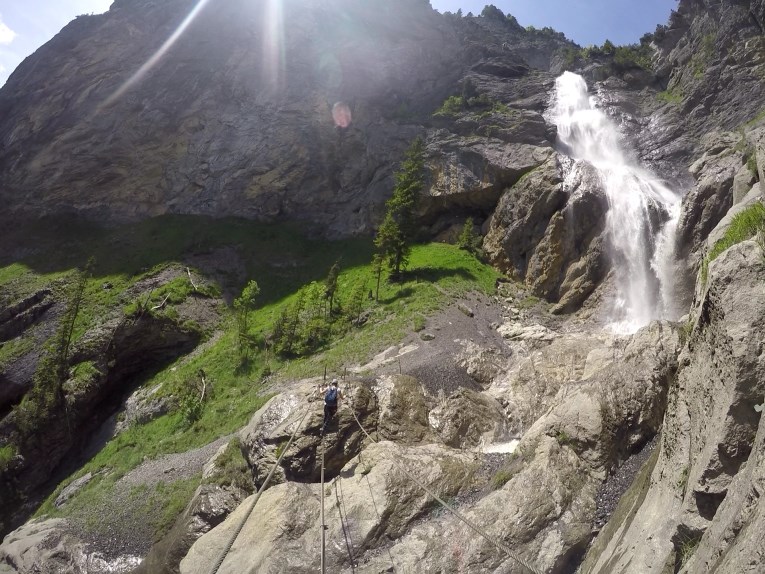 Soon, it started to get more difficult, when the steps got bigger and we gained altitude very quickly.
We had much air under the feet, even I could stand on the steel nails, I sometimes felt less comfortable. 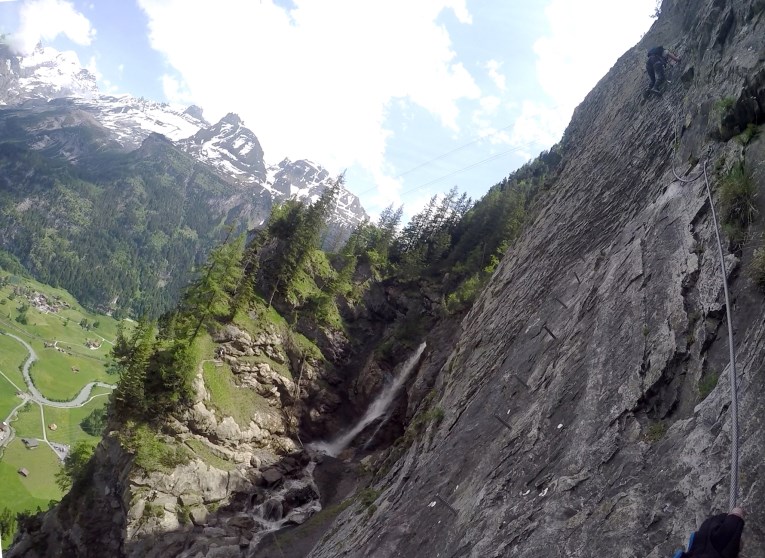 After an hour or so we reached the first bridge, which crosses the waterfall and here we had solid ground for a short bit. I could take some pictures and take a deep breath.

The adrenaline was really high. As there is no return, I have to finish this route. Beside Somehow I got scary along the route, I'm not sure if it was the very steep route, with a lot of air under my feet, the few places where you could hold yourself or just maybe the route was just slightly to difficult. But on the other hand it was fun to do. 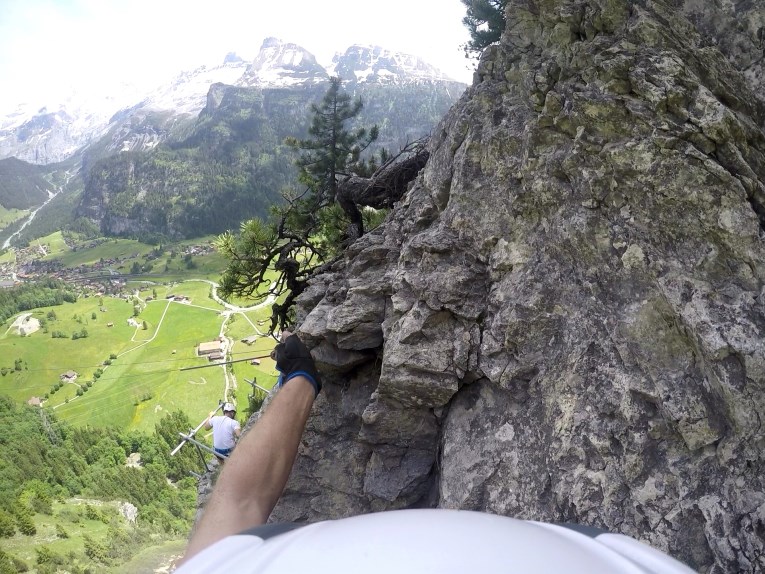 Sometimes, I stopped to enjoy the scenery, which was absolutely stunning and just use the right technique and look carefully where to put my feet.

After crossing another bridge, I could see we would finish the route very soon. And we reached the top shortly after. When I finally reached the end of the klettersteig route, I was proud! Even I felt a little scary sometimes, I managed to do this route. I enjoyed the scenery a lot! 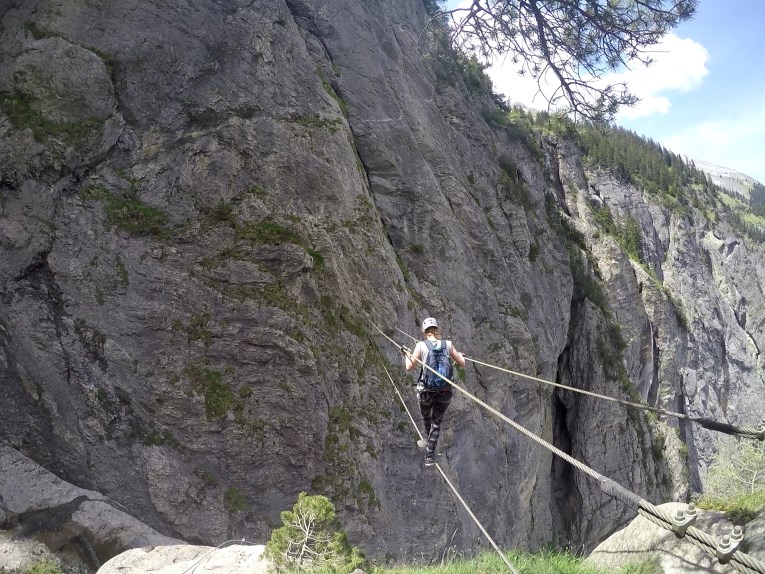 When I got out of the car, I knew this route would be tough. It was the first time we would do a D classification. Although I got scared and the adrenaline was pushing me to go further, the view was spectacular with the waterfall and the view over the valley. 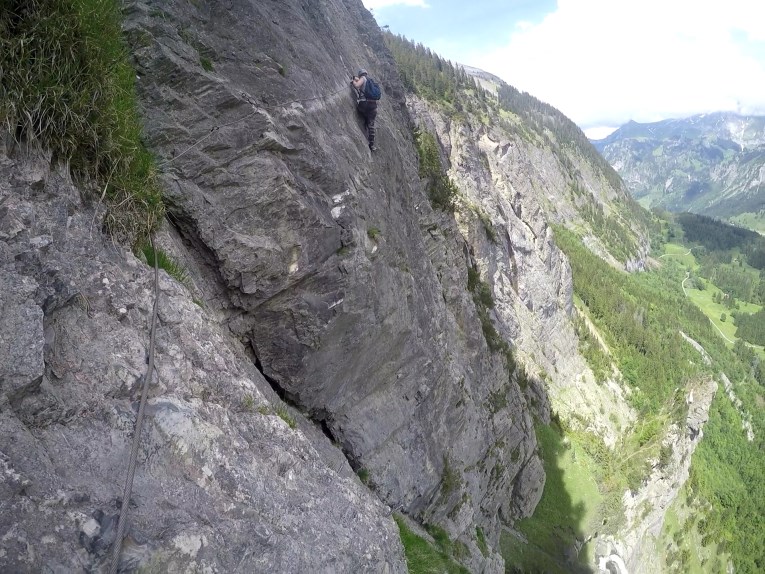 The route was safely secured, fun to do, but for me maybe a little too difficult. When I look back at all the klettersteig routes on this trip, this might be even my favorite, even it was difficult for me. I know now I can do it. I just have to take my time.

My husband thinks this route was the best and loved it a lot! He is more brave than me. When I got home and take a look at the pictures and video’s I felt I would do it again another time. Although I felt scared, I know I can do it. And this klettersteig was just spectacular! 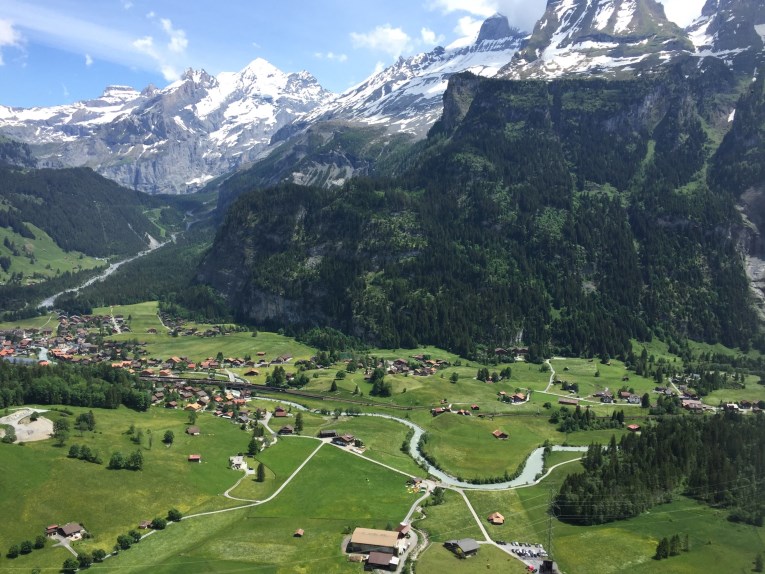 Parking: at the lift of Kandersteg

Take enough water, especially on sunny days, as the route will be exposed in full the sun.