Traveling through Sri Lanka is really easy. You can travel with public transport or with tuktuks. Another way which is easier, but more expensive is with a private taxi. With a private driver we drove from Mirissa to Tissamaharama. Along the way we had a quick stop at a viewpoint. But nothing special.
In Tissamaharama we found a nice guesthouse. For the next morning we booked a tour to Yala National park. 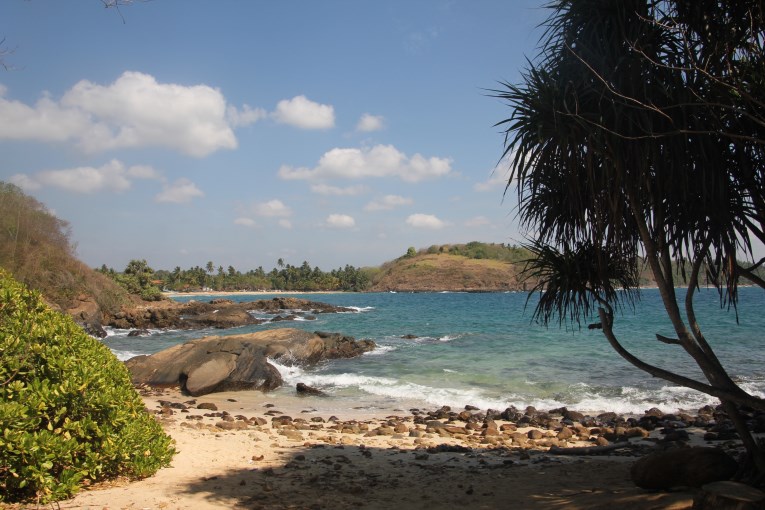 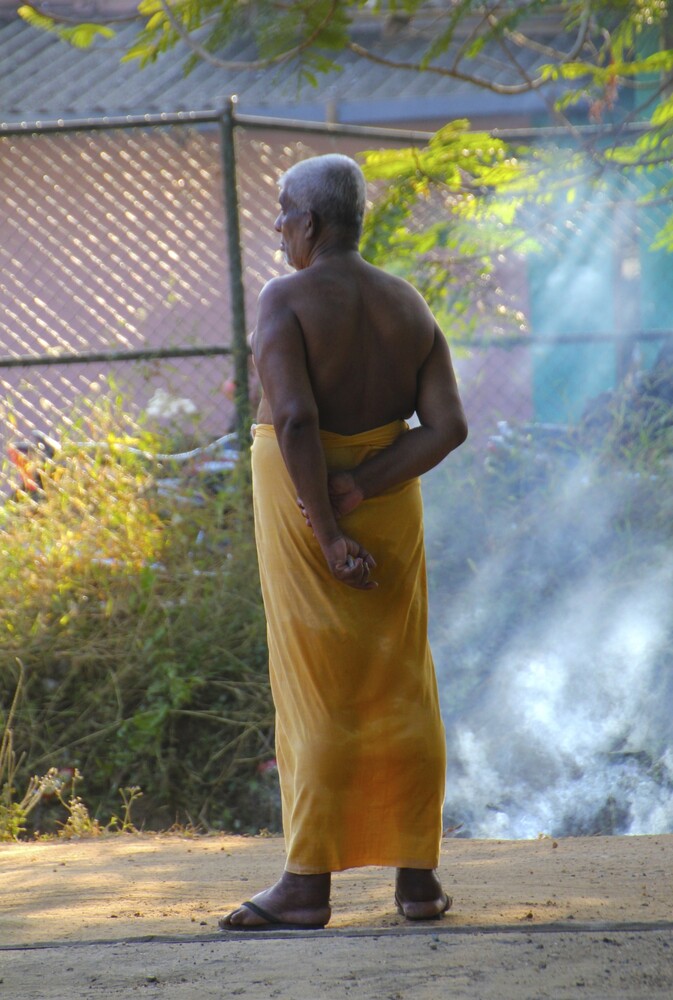 We stayed in Mihisara lake view guesthouse. This is a little outside Tissamaharama. As the name would suggest it doesn’t have a view over the lake, the lake is about 10 minutes walk. Debarawewa lake is beautiful and quiet. If you go here in the early morning or the end of the day you can see some animals. 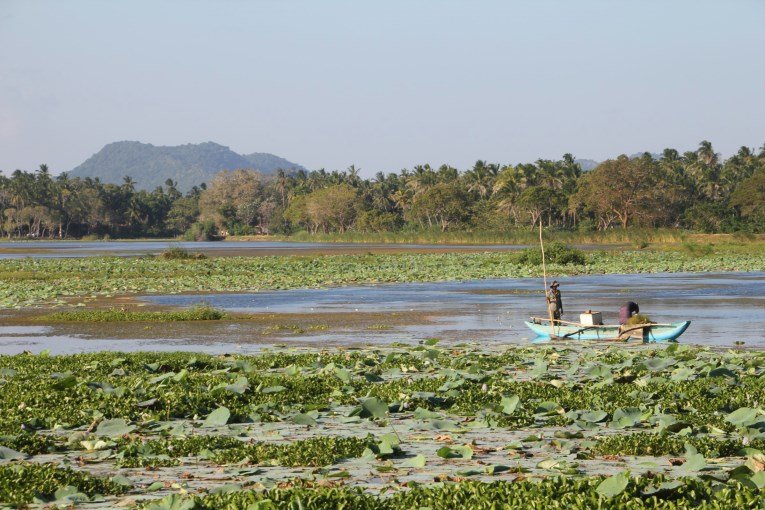 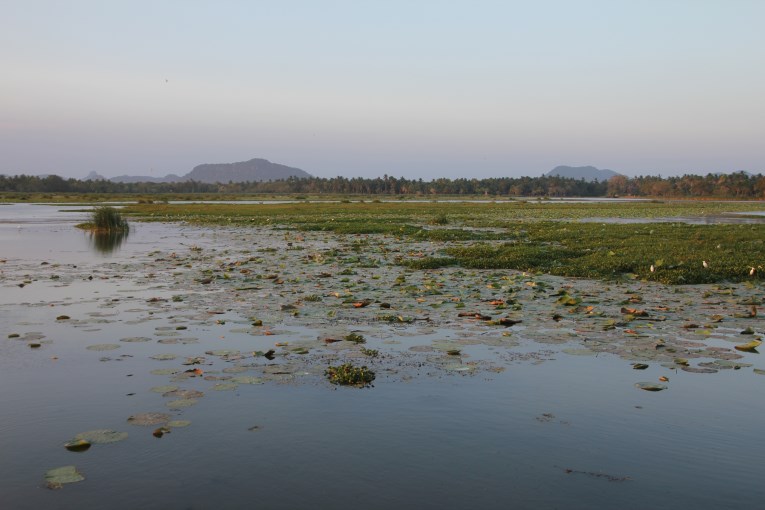 When we walked the easy road to the lake, the first thing we saw was a huge crocodile. He was sunbathing on a rock close to the edges of the lake. This was not the only crocodile, if you look closely you can see them laying still in the lake.

Surrounded by green bushes there are loads of colorful birds to see. Special bird spotting tours are using this lake as a famous spot. 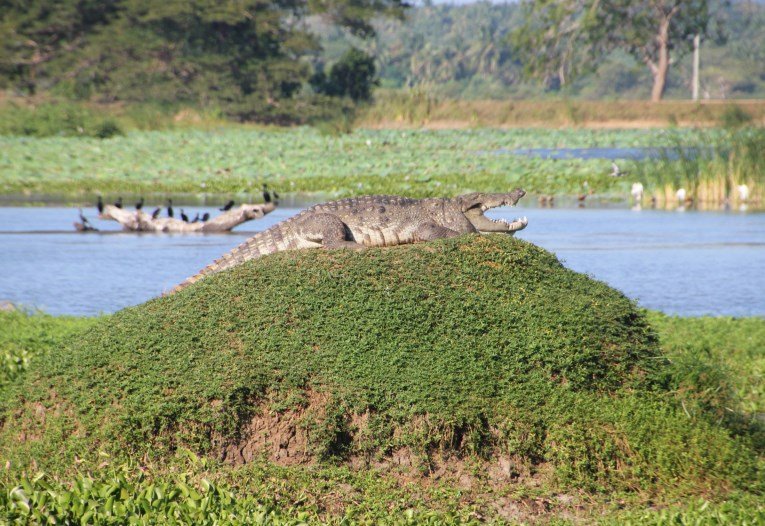 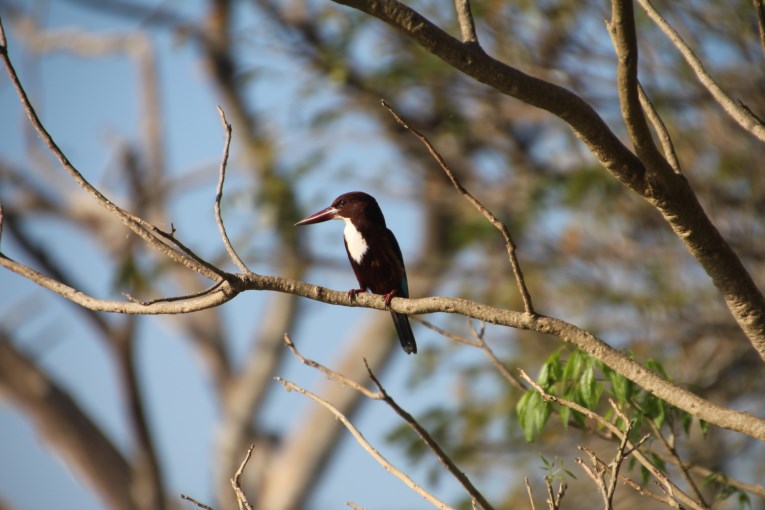 We wanted to go to Katagarama to visit a temple which supposed to be nice. The easiest way would be taking a bus. When you can find the bus station, it probably is. When we walked trough Tissamaharama we couldn’t find the bus station, probably missed a turn. A tuktuk driver approached us and Timo made a deal. 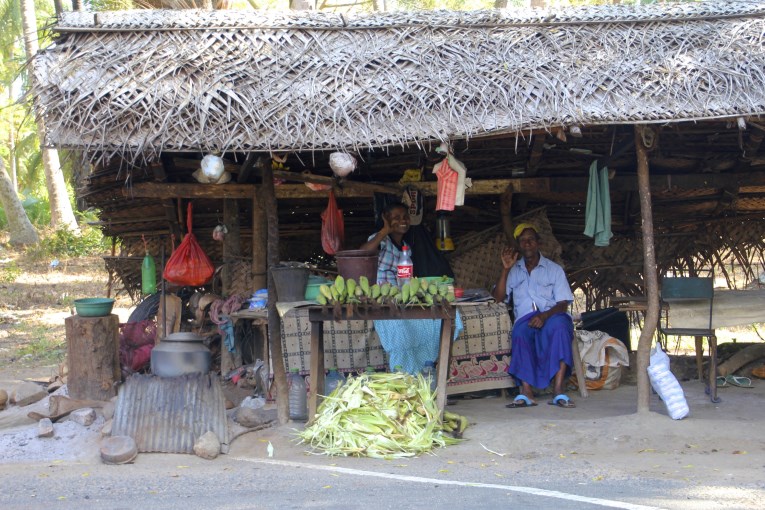 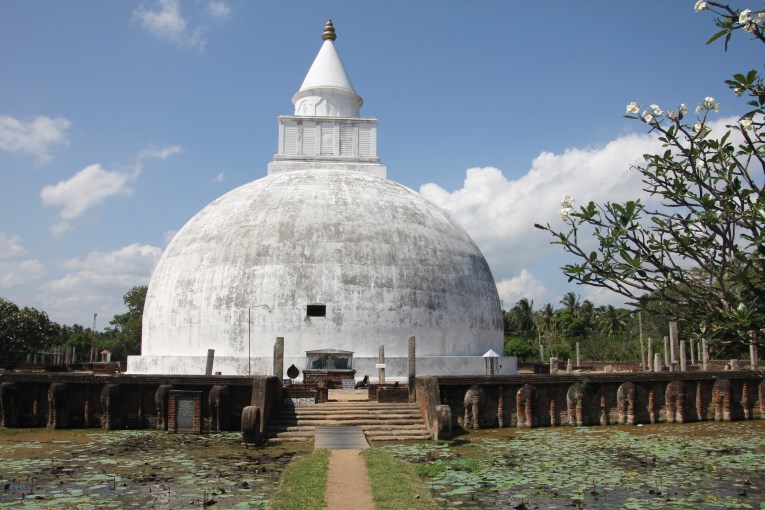 The drive was short and pleasant. After payment the tuktuk driver wanted to take care of us and followed us to the temple. We didn’t liked it too much, but it was clearly he wanted to practice his English. At the entrance statues of elephants where lined up. Here we needed to take of the shoes. Timo didn’t want that hassle so he decided not to go inside. I took of my flipflops and entered. 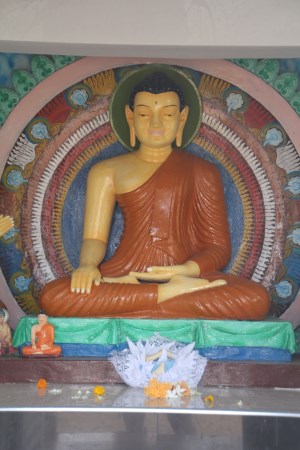 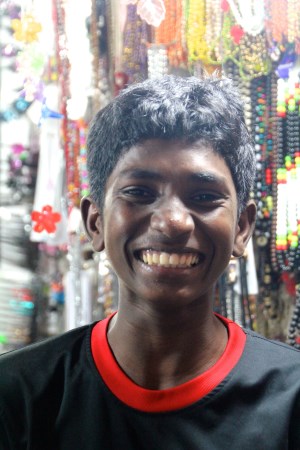 There where a few kitschy temples and a stupa. An other stupa was a bit a walk trough some kind of park. I continued this path, the floor was burning hot and almost at the end of the path I figured I could have taken my flipflop and where them on this path, taking them of at the next stupa. 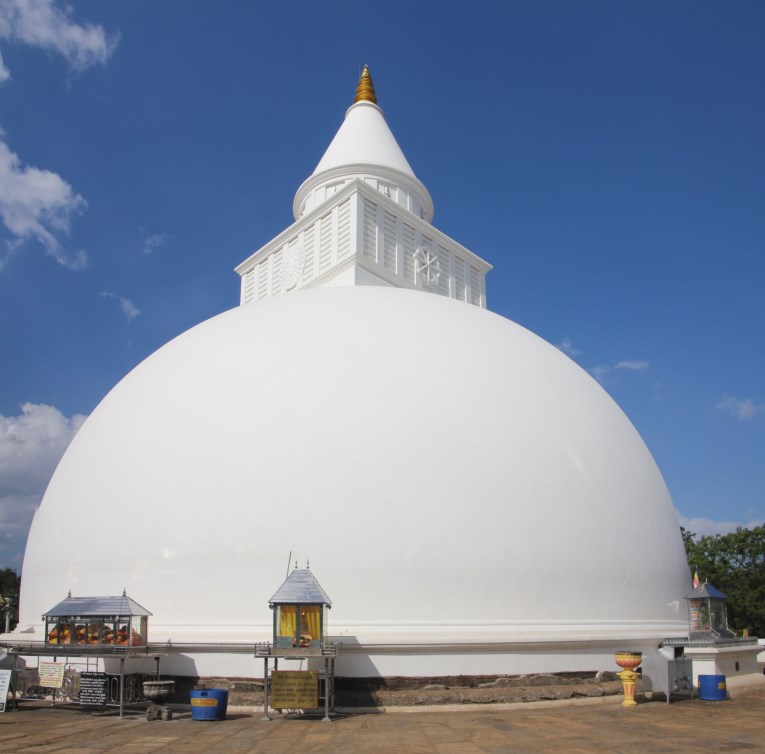 In the park there where monkeys. But when I came a little too close to take a picture they showed their teeth and I quickly walked away. 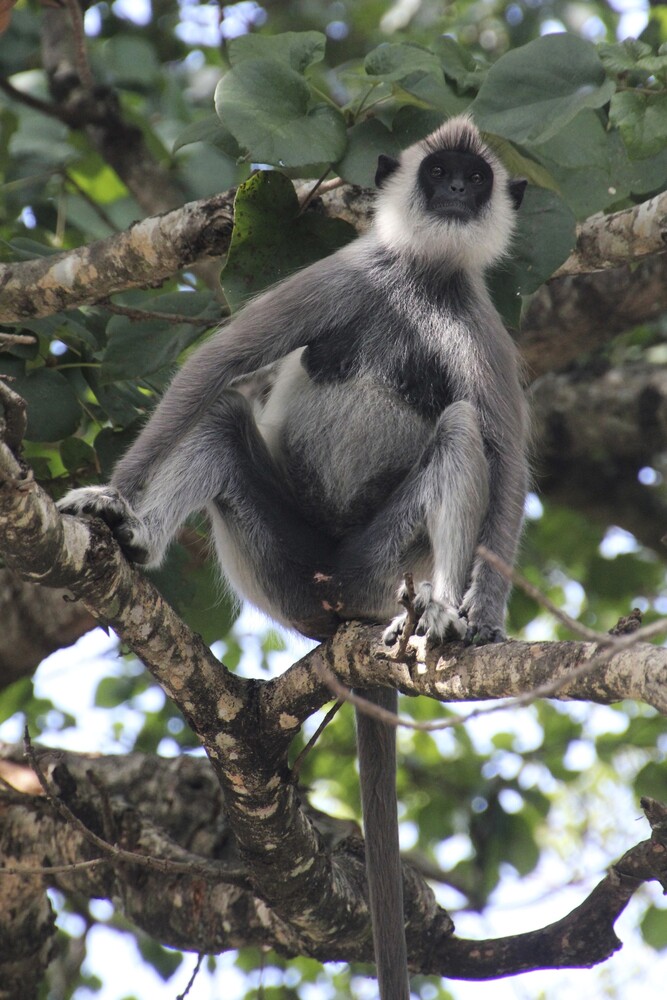 The tuktuk driver was still at the same spot as Timo was waiting. There where no other tuktuks waiting so we just stepped in and we just decided to gave him the same amount of money. What a surprise it was when we came back to our hostel the first amount we payed was for a return trip! For his honesty we gave him a nice tip.

Later we found it is best to visit this temple at the evening. Then there suppose to be some ceremonies. Too bad we missed this! 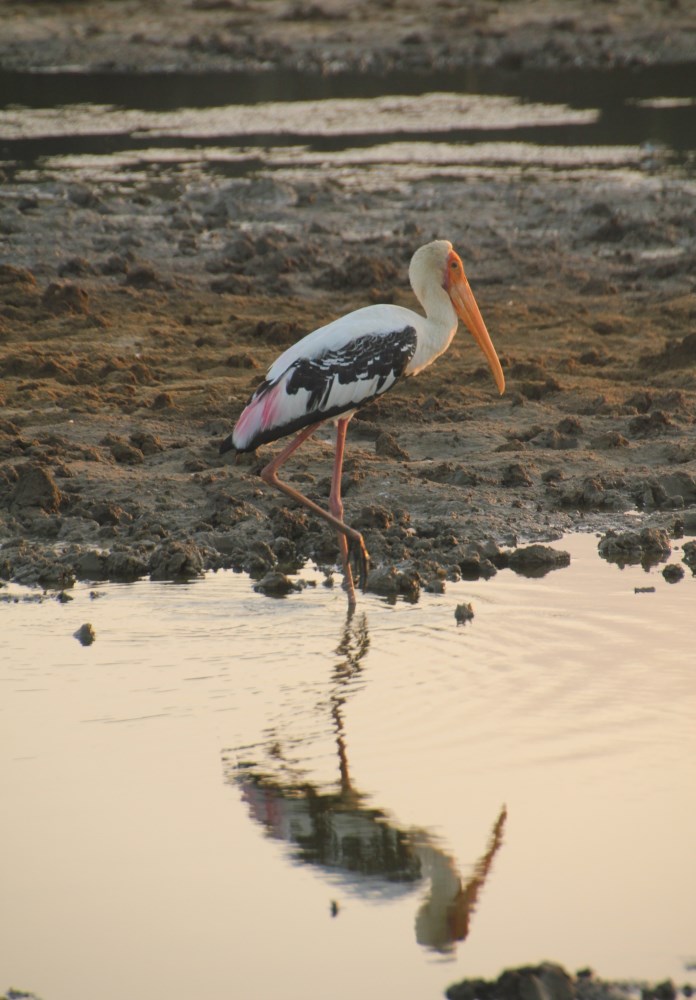 4.45 A.M. Somewhere in my dreams I heard music. First I thought it was a part of my dream but soon I realize it was my alarm clock! We packed our bags and got a wrapped breakfast from the lady. The jeep came on time. We needed to pick up 2 more guests, with this we had a new jeep and a lot of space!

At the entrance of the park it is first come, first to go. So we needed to wait the line a bit. We were early so this wasn’t too long. 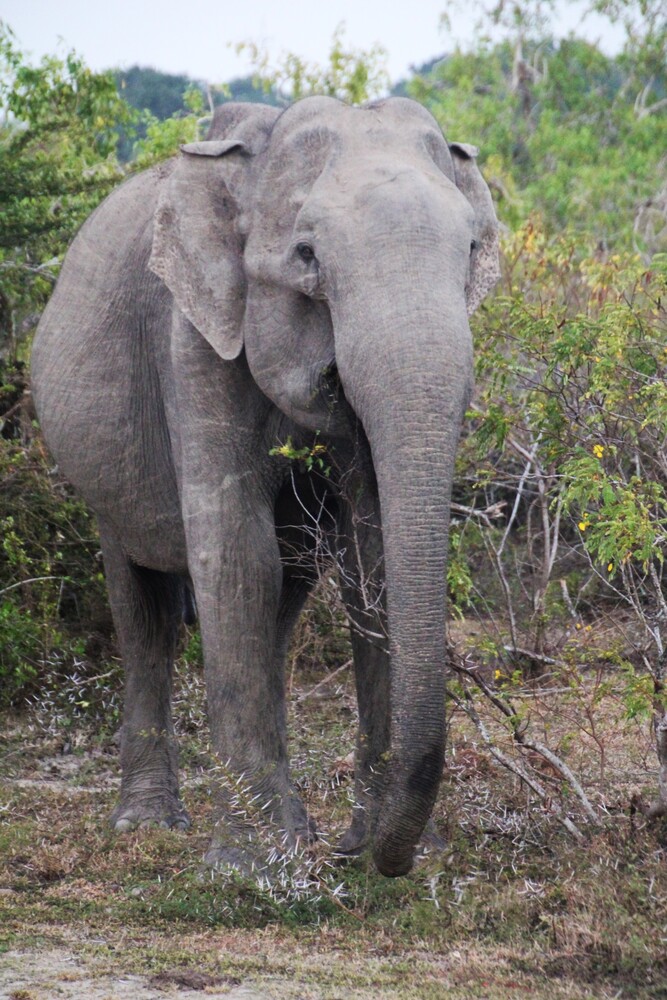 As soon as we crossed the entrance we saw a huge, male elephant! We just had time for a few pictures. 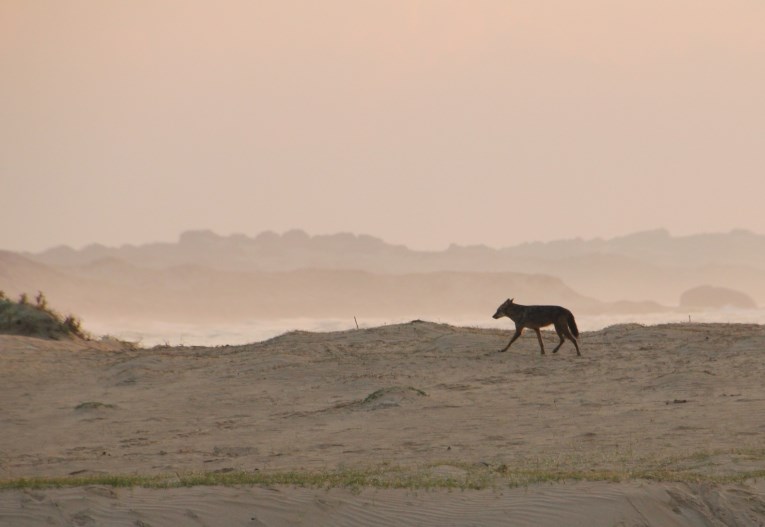 The main goal to go to this National park is to spot leopards. As they are active in the early morning, all jeeps left to places where they used to be. On the way we spotted a few crocodiles, a jackal, which I found really cool and many birds. 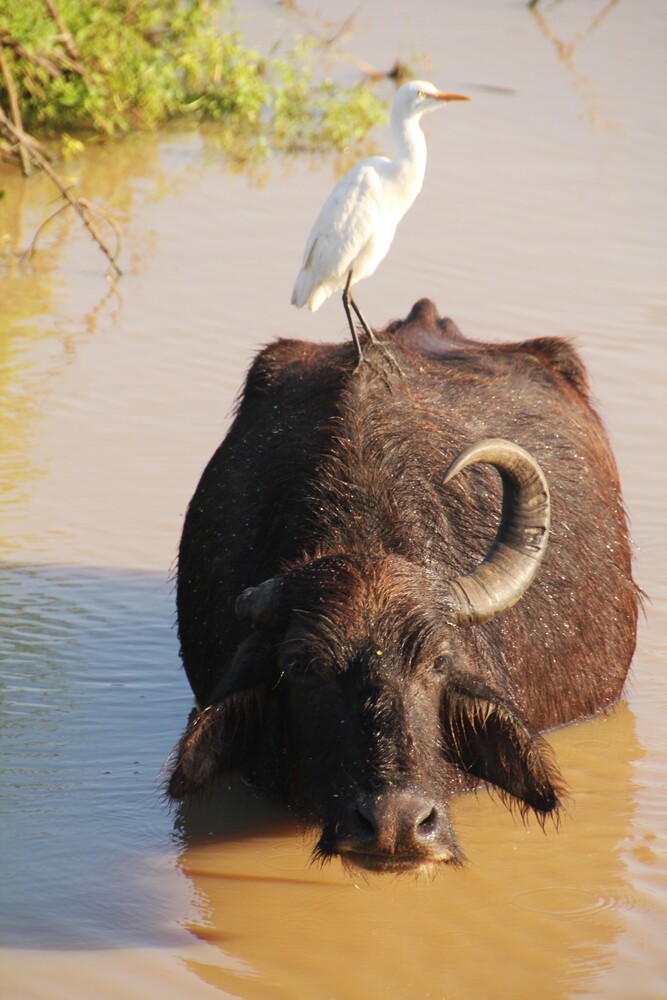 A phone rings. The guide is answering and he asks us if we are good to go. They spotted a leopard! We drove away quickly and we saw we were not the only ones. About 20 vehicles where waiting crisscross down the road. Our guide had a good sight and he pointed out the leopard was moving around in the bushes. I saw a real glimpse of this beautiful creature. 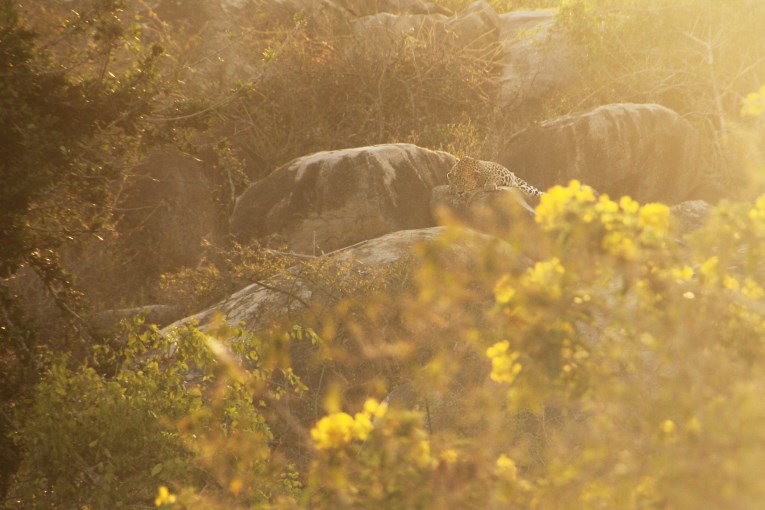 Of course our guide knows the way around the park really well. He just shouted; ‘Hold on tight!’, putting the car in the back gear and drove really fast backwards. A small path was leading in another direction, shifting the gear forwards and after a few minutes we were standing again between about 15 cars. The guide was maneuvered the car tactically between other cars expecting the leopard to be in a certain place. He asked for my camera, because I have a big zoom lens. Just a few seconds, he called us to stand on the side of the car. And pointed in the direction. The big cat was a bit far away, but we could see him clearly laying on a big rocks enjoying the sun rising.

This was so cool to see! After a few minutes the cat stood up and left the site. 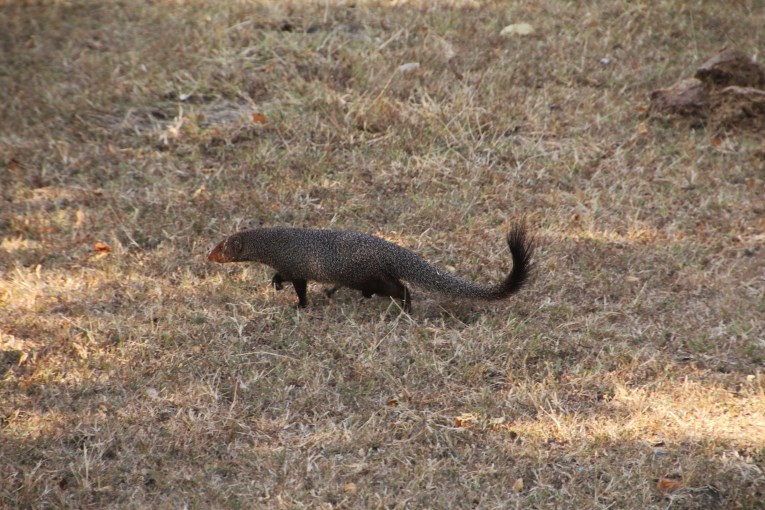 We left on a different road to find more animals. We were driving around on dirt roads between the low bushes and lakes. The guide spotted some wild pigs, buffaloes, a huge monitor lizard and of course loads and loads of colorful birds. 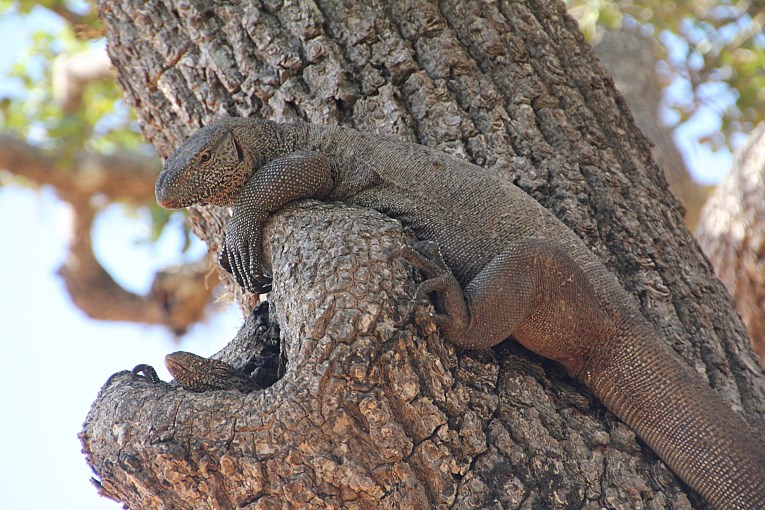 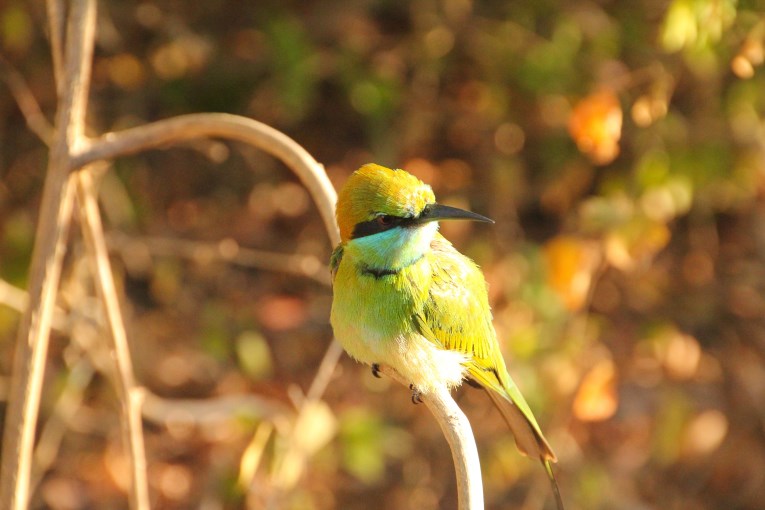 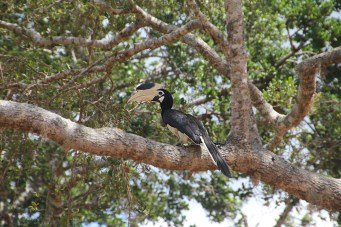 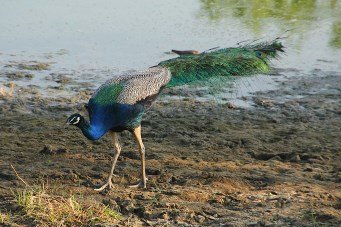 After a few hours, we had a rest at a beach of the national park. There where no facilities, but enough bushes. The beach was pleasant and it was a good spot to eat our breakfast. 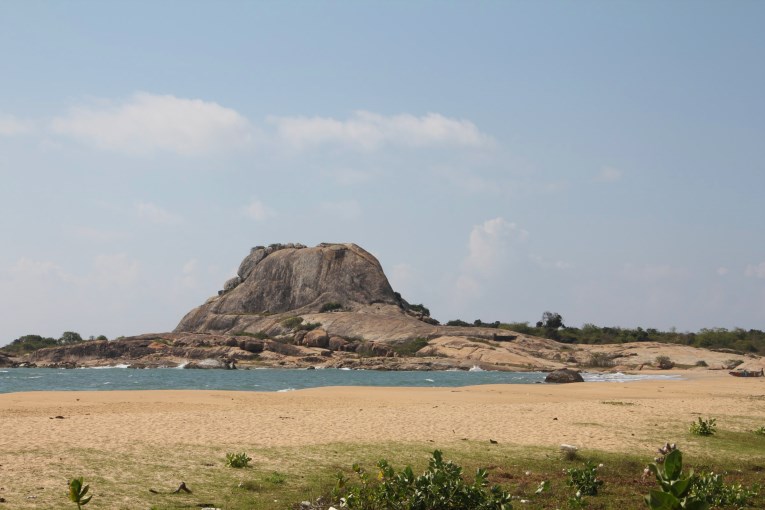 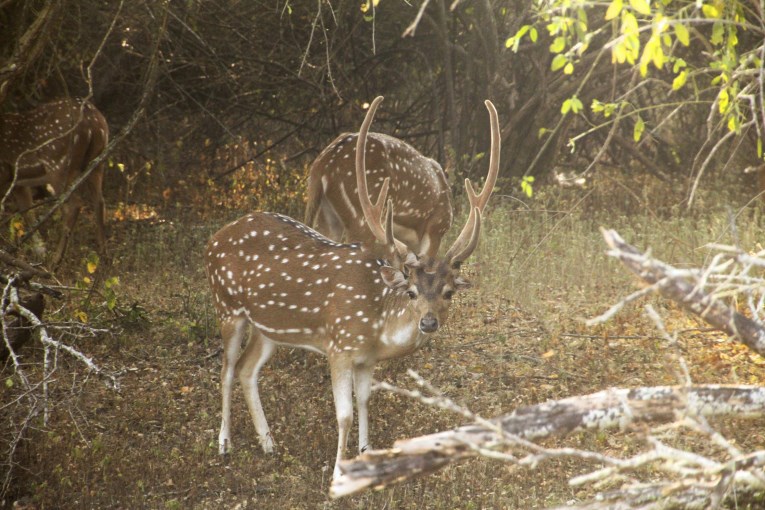 Around noon we came back to the guesthouse. I really enjoyed this tour, even though spotting the leopard was a bit of a hunt down. It didn’t seem to bother the animals, so it was ok for me. We paid around 35 euro for the half day tour. I think it was worth the money and value for the money!

You can book a full day tour too. Around noon, they told me, you go back to the spot where we had breakfast to relax and to escape the heat of the day. In the afternoon you 'll go spotting animals again. 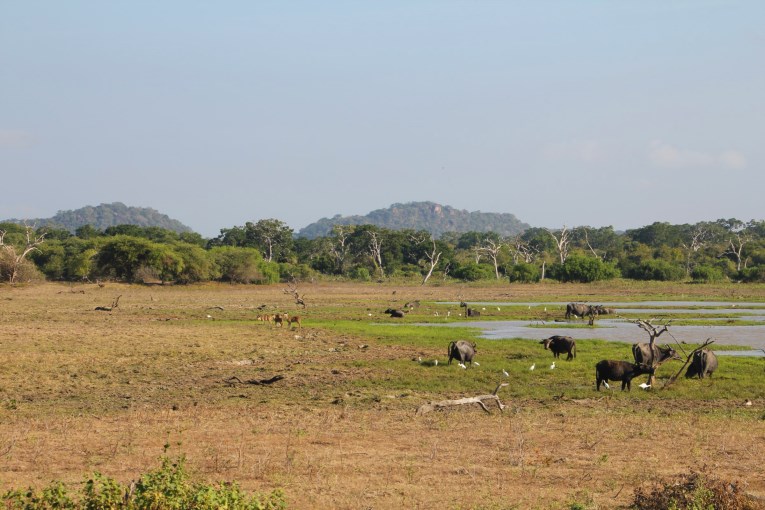 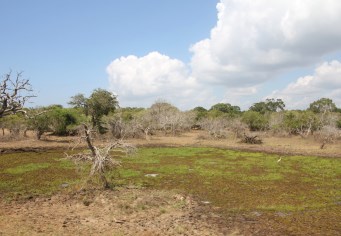 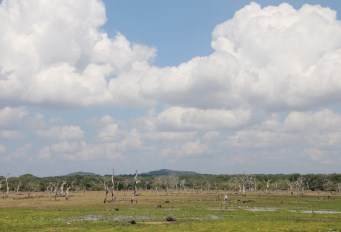 After another night at the guesthouse, we left the next morning to Haputale. 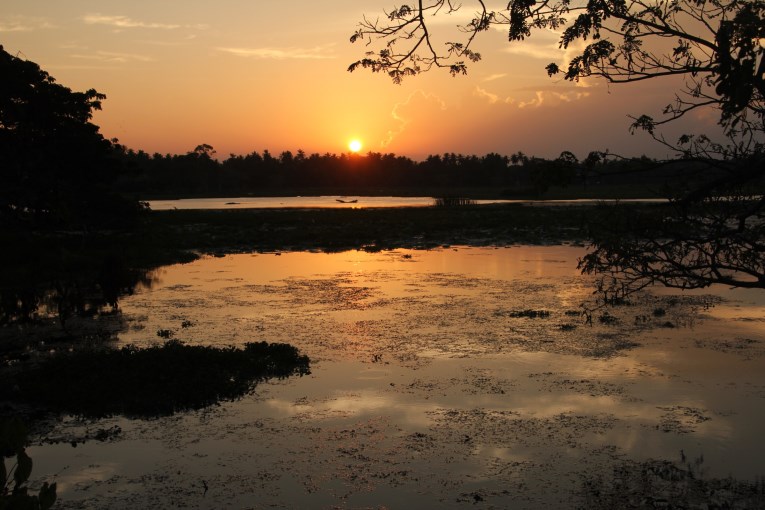 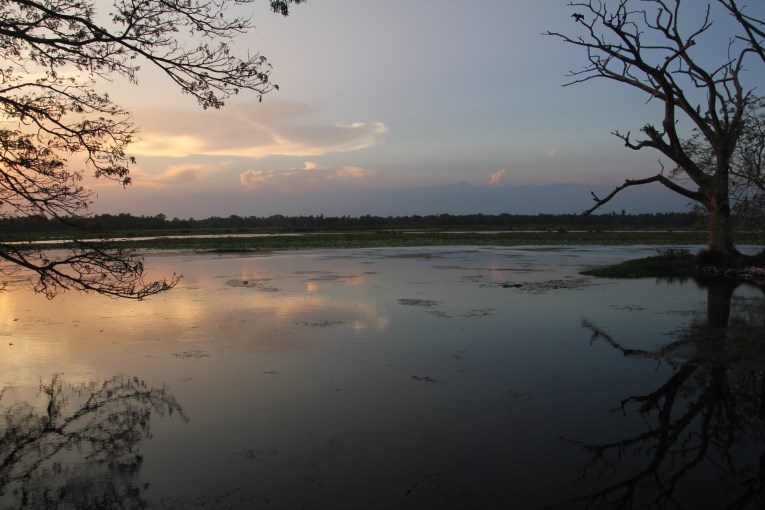 Yala National park was absolutely my favorite spot! The nature was me scenic than I thought it would be. Even tough it can be a little busy in the park, when all the cars are spread, you'll only see once a while another vehicle. It is a great way to spot animals in their natural environment!
I really can recommend for families. I'm sure children would love this safari! 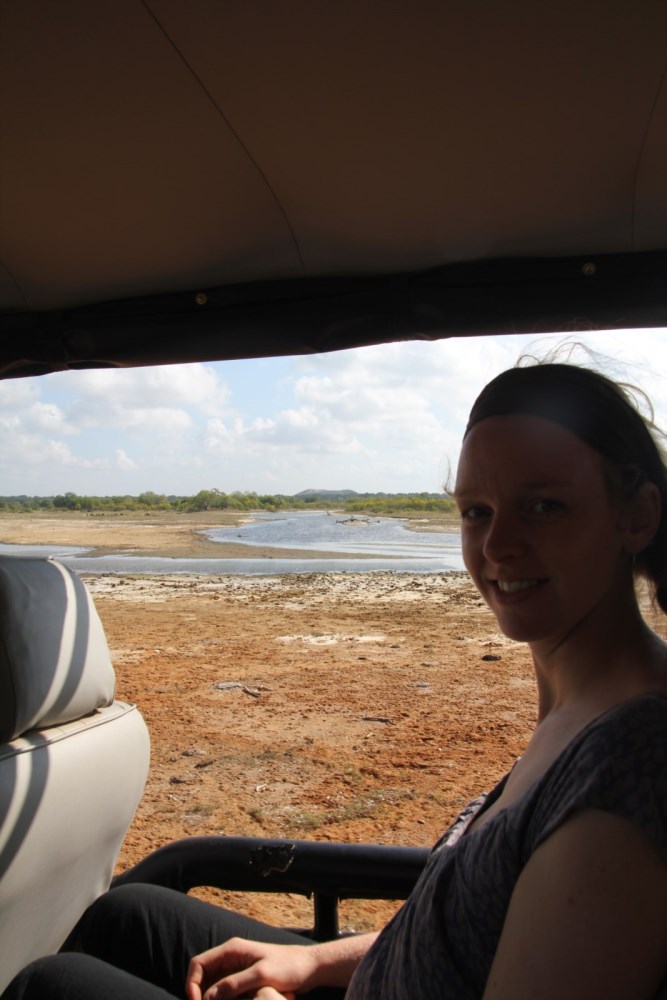