Since in 2008 I met a girl who visited Iran and was raving all about it, I had in my mind I want to go there some day. That time to me it did not felt safe and to get a visa was difficult. So I just kept it in mind that one day it would be the place to go.

August 2014. I got a message from my friend who loves to travel too. ‘You know Pegasus airlines has great deals to Istanbul? Me and my wife booked a flight’. Istanbul is a place which I love to see and in November I would have some time. So the same evening I start surfing to the website. I saw great deals, only 90 euro return. I entered some dates and since I didn’t know this airline well I was scrolling to the list of places where they flight to. My eye catches Teheran and before I blinked my eye I clicked ‘search’.

Just a few moments I had to wait before the price was revealed. 200 euros popped up. I couldn’t believe it so I entered the dates again. Again 200 Euros’s return. I tried to find the catch, but it all seamed to be fine. 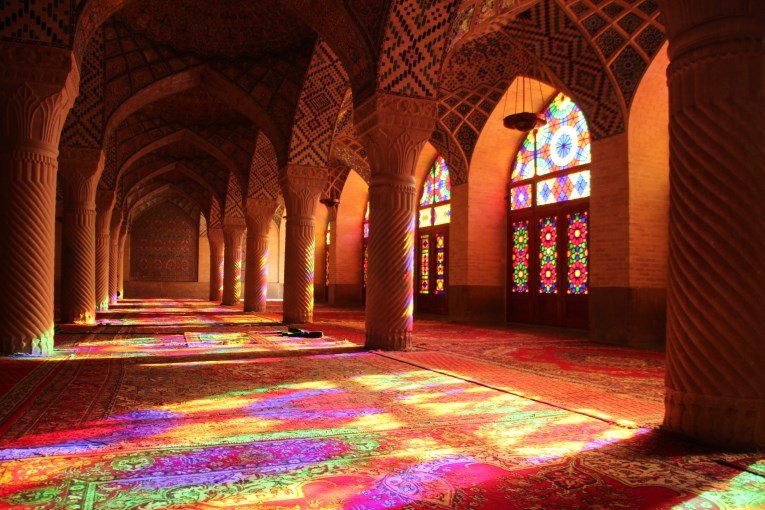 I told my husband I found a great deal to Iran. And as I expected he wasn’t trilled at all! I tried to convince him to come with me, but his reaction of ‘definitely not!’ Was loud and clear. So I searched the web try to find out if there is still a problem to get a visa. The website of the embassy of Iran in The Hague was clear. I only needed health insurance, copy of the flight tickets and some documents to fill in. Easy as that!

With that problem having cleared I only have to figure out the safety and how the dress code is. The dress code was still quit strict. Cover all female body curves and I should wear a scarf. Well I can deal with that. The safety issues seem to be better and better. As long as I avoid over crowded places and the land borders of Iraq, Afghanistan and Pakistan it seems to be fine. 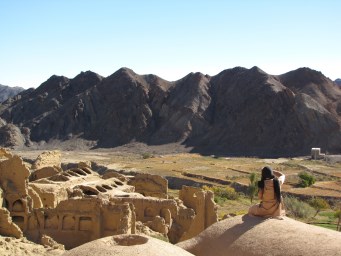 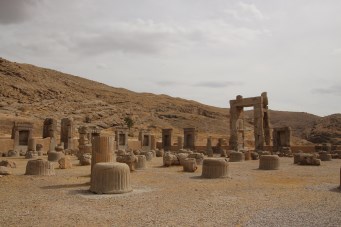 Two days later I booked the flight. I called my older sister to tell her the news. She and her husband love to travel too, so I made the joke she could join me. She said no as I expected. One week later she called me. What are the exact dates? 'I’m about to make the booking, I’m coming with you!’ She said.
I was so happy, since it is so much more fun to travel to a country like this together.

We started to prepare four our trips.

Before my trip I searched for the right dress code. Of course I knew I had to cover my bum and I had to wear a scarf. A scarf could be a shawl, which you can drape around your head and neck. I guess most of the woman have a shawl, so you don’t have to buy something specific. It doesn’t matter if it colorful. I had one in black and one in pink/beige. No problem!

To cover my female curves was more of a challenge. A dress or a blouse, I just couldn’t figure it out which would be the best. Since it was November, the temperature could be warm and cold. Finally, my sister said she bought a trench coat. This would cover the bum and the curves. We ended up buying the same coat, since there wasn’t much available in the shops in this season. 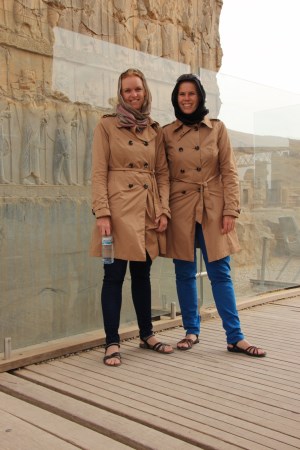 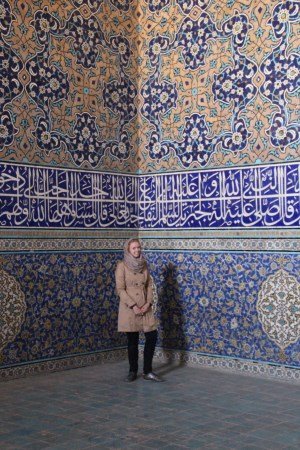 In the end we felt this coat was spot on! Woman complimented us with dressing us properly and still looking neat. Underneath the coat we could wear whatever we wanted. Singlets when it was warm, or a vest when it was cold. Perfect!
We did wear sandals and sneakers together with a skinny jeans. This was fine.

I would lie is I say I didn't mind wearing the scarf during the trip. Because it slipped of my head all the time, I was trying to correct it all the time. Sometimes I even used hairpins! It got itchy and when you need to wash you hair, it takes ages to dry. So you have to wait to go outside before you can put on a scarf. But it wasn't too bad. You only have to adjust and be aware of it all the time.

Wearing makeup is allowed, but we noticed you would see it more in bigger cities. We didn’t wear it, just to be sure. The same counts for nail polish. Woman start to wear it right now, so we kept our nails clean to avoid being inappropriate. 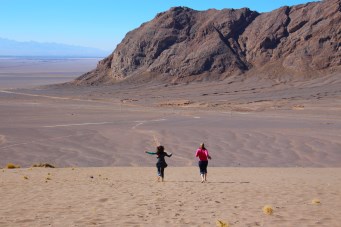 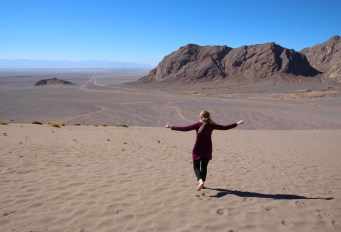 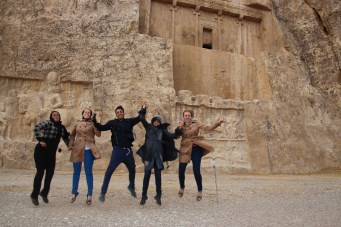 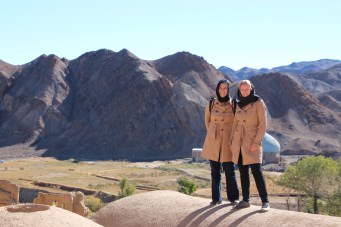 Some places like mosques you have to wear a chador. This is a big cloth which covers your whole body. You can see woman wear this all the time, but to us this was new.
If you need to wear it, you can borrow it at the entrance. Woman will help you how to wear it. Don’t hesitate to ask!

At some places you might notice there are woman with a green feather broom. If you show too much hair, they tap your shoulder. You should cover your hair immediately. But on tourist they are not that strict. They know it is difficult to handle the rules and you won’t do it on purpose. 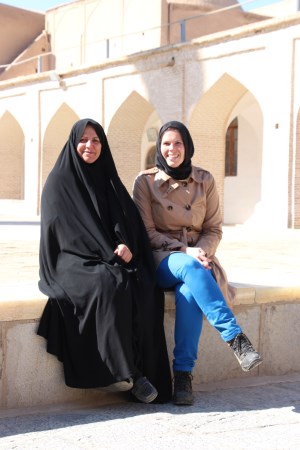 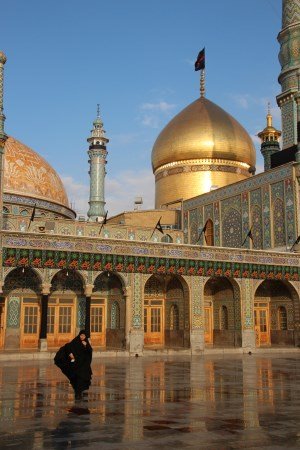 There are no ATMs so you have to take cash. Right after customs and when you collected your bags, on your right hand you can see an escalator. Go upstairs, immediately on your left hand you can see a changing office. This office would have the best changing rate.

There are actually 3 ways to change your money. The official bank, changing office or those man on the streets, who offer to change money. The last one is illegal for us, so avoid this. The official bank gives a low rate, so the changing offices would be your pic. You can find them everywhere in the cities.
Some hotels might change you small amounts, which can safe you when you run out of money.

Another thing which can be complicated. The official currency is called Rial. But popularly it is called Toman. For example. 100.000 Rial is 2,50 Euro. But when somebody says 10.000 Toman, they mean 100.000 Rial. Do you get it? Mostly the price tags are in Toman.

To avoid misunderstanding we just asked to type the amount in our mobile. But you’ll notice, you’ll get to used to it quickly.

The language Farsi is difficult to read for us. So when you want to book a bus ticket you’ll have to ask about time and money. Most cities have a big bus station with a lot of different companies. Just ask around for time, money and cities. They’ll be happy to help you. Overall with all the help from people, it is easy and cheap to travel with the bus.

The buses leave mostly close from the ticket office. Just ask them to show the right bus.

When you leave the bus station, there are taxi's waiting to take you to your hotel. At some bus stations you have to walk to a taxi booth. Here you buy your ticket and wait for the destinations your heading is announced.
To us this wasn't completely clear, but people helped us, how the system works. And it works fair for every person.

One time in Esfahan they searched us on the bus station, we were a bit late. They told us the lady at the office wrote down at the bus time table, that there where 2 blond tourist from Holland and that they should make sure we would catch the right bus. How sweet is that?

Coincidental my sister and I traveled to Iran with the event Toshua and Ashura. We didn’t know much about this event or how it is celebrated or what it is for.

When we arrived in Esfahan, the day before Tahoa and Ashura would start, we found out for 2 days there will be no buses.

We asked around and it seemed to be in the most places there will be just a few buses or no public transport at all. There where a few taxi’s when we stayed in Shiraz, so going around in the cities would be fine I guess. 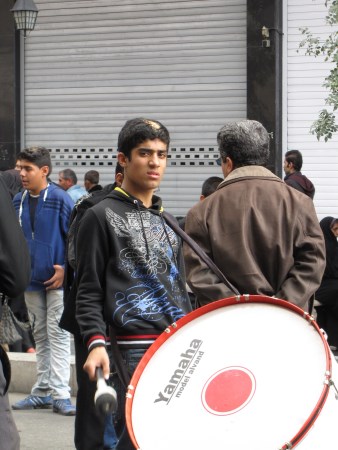 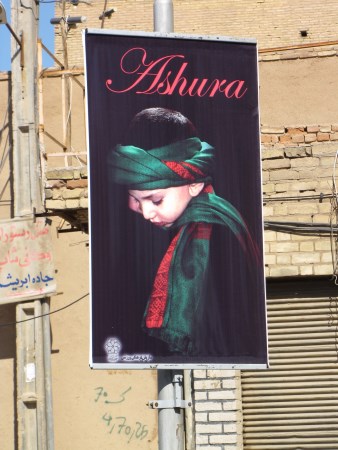 We noticed there will be a few restaurants opened, but that will be at random times. In the hotel we could get a meal, so I assume this would be possible in most hotels.

Ashura (or Asjoera) is celebrated on the 10 day of the month Moeharram, which is the first month of the Islamic calendar. The day before Ashura is a fasting day which is set by prophet Mohammed, but fasting is not compulsory. This day called Tasua (or tassuoua). Man and woman are dressed in black. The ceremonies start on this day and continue on Ashura, the next day.

Within the Sjiisme Ashura has a special closure for the 10 days of a mourning period. They remember the martyrdom of Imam Hoessein in the year 680. Imam Hoessein is the grandson of the prophet Mohammed. 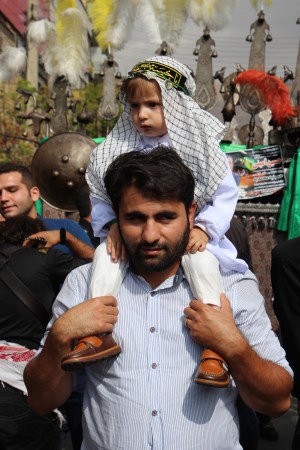 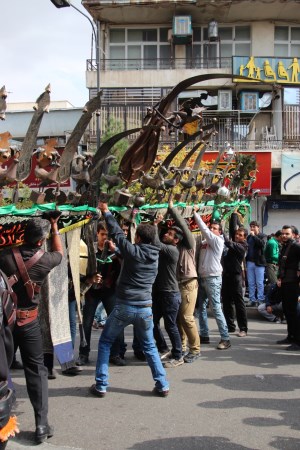 There are mourning rituals and processions on the streets. Woman slapping their chests and chanting. Some man want to feel suffer of Imam Hussein by flogging themselves with chains. In some countries man cut themselves with knives. But soon we found out this is forbidden in Iran. There are several groups with their own passion plays which represent the martyrdom. There are different plays with drum music.
Most of the people don’t go to work. You’ll find streets blocked to let the processions pass. People go to the mosques to pray, which are overcrowded.

Fountains have red colors to represent the blood which has been shed.

They provide free food and drinks. The lines are long. Luckily with the family we have celebrated the event we could taste some of this delicious food!

Since it is really crowded at most places, they have a lot of security. This contains a body check and they check your bag. Sometimes you have to store your back in a special place. They will point you out where you can store it. It is free, and you'll get a ticket to pick up your bag. 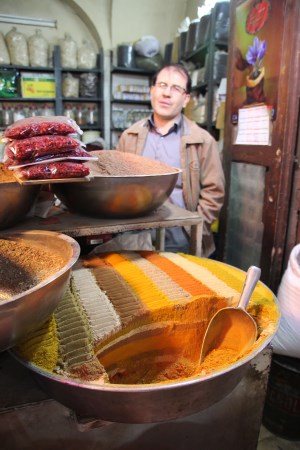 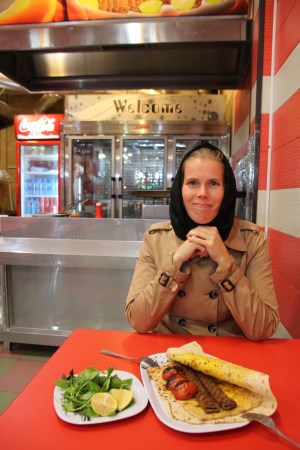 The day after Ashura everything was back to normal life. Shops opened, sights and museums opened. We could visit mosques and travel around with the buses. We did notice buses we couldn't book the bus we wanted, as people were returning back to their homes. We just took an other route to get were we wanted to be.

It was interesting to see this special event. I couldn't imagine how it would be.