After Timo and I set foot in winter wonderland Armenia, we figured it would be much harder to get around with the snowy and icy roads, than expected.
Via TripAdvisor I arranged a taxi driver to pick us up from the Yerevan airport. This man called Armen and he was a friendly, non English speaking guy. We decided to ask if Armen could drive us around for a few days so we could see something of Armenia. We arranged all of this via our contact at TripAdvisor. This man could speak English and Armen didn’t.

Armen was passionate about his country. He loved to show the best churches and sights and he told us about it. Of course our conversations wouldn’t be in English, Dutch or Armenian. With hands and feet we managed to understand each other. With some extra information displayed at the sights, we managed to visit some really nice places. 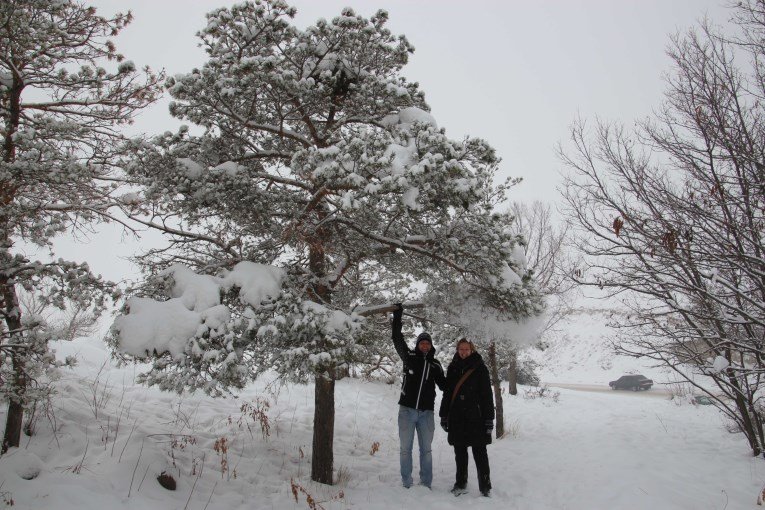 In this blog I will tell you about the best churches and monasteries we have visited on our trip. In our 4 days in Armenia this was the best we could do. We did day trips or half day trips from Yerevan and settled in Park Boutique hotel for 4 nights.
Next time we will visit this country in Summer so we could explore more and do some hiking too.

Our complete trip would end in Georgia. We would fly back home from Tbilisi, Georgia.

We arranged a taxi with Aram from TripAdvisor. From Yerevan all the way to Tbilisi. Along the way we had a few stops. We had an other driver this time, which was okay in driving, but we felt he didn’t liked to be a taxi driver, like Armen did. But it was good we could visit some sights along the way, instead of taking a night train and see nothing. 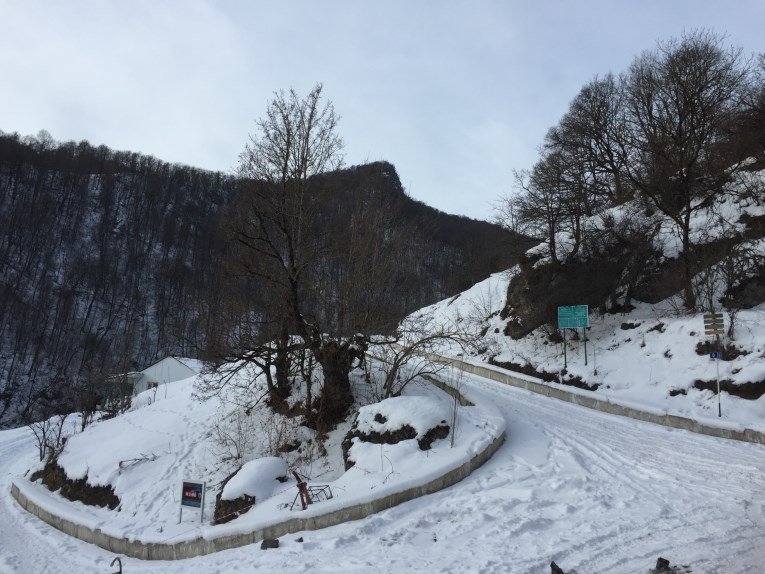 On a small peninsula at the northern shore of Lake Sevan you van visit Sevanavank Monastery. A stair will lead you to the hill where the church is settled. This church was founded in 874. The church is small and has some interesting details. The most spectacular about this monastery is its setting. You have a 360 view and you can see across the lake Sevan.

The stairs can be slippery during Winter, so mind your step!

We've visited this monastery on our way from Yerevan to Tbilisi, Georgia. 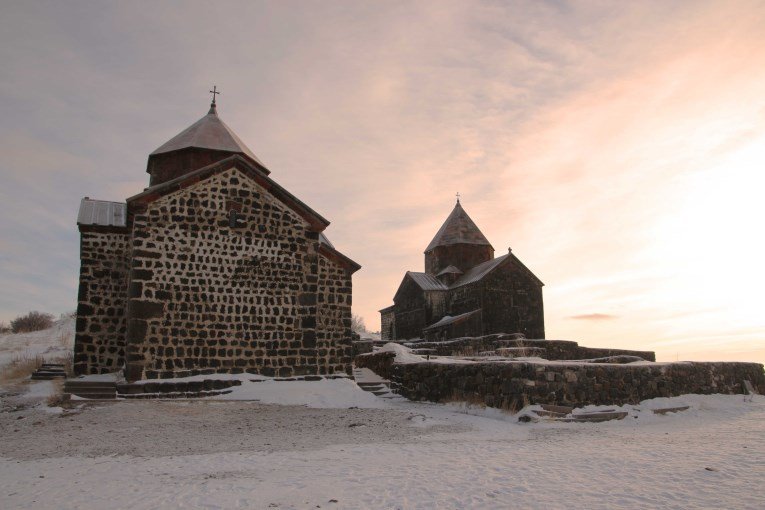 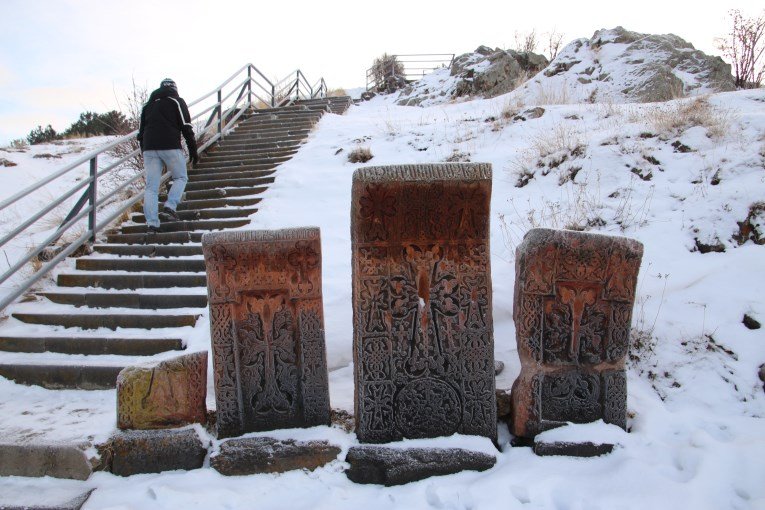 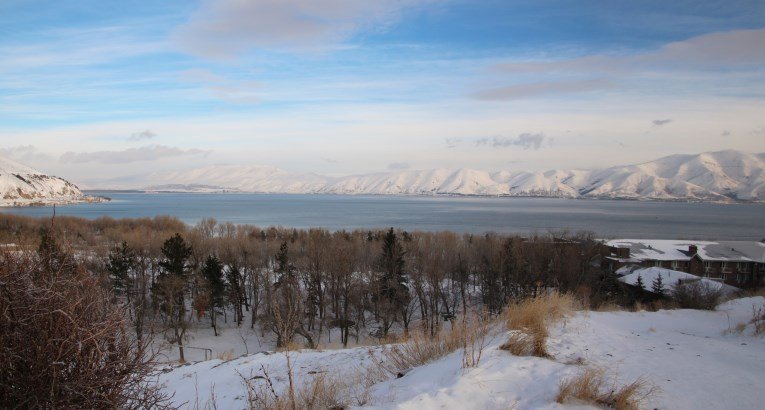 Near the town of Dilijan there is a monastery complex settled in the hills. A small road will lead you to the buildings, which are churches, vestibules and burial vaults. Most buildings are undergoing a major renovation. Inside the largest church is a big dome and it has arches and columns. The setting between valley is wonderful and with the snow it has an ideal setting. In Summer this must be a very green place and absolute worth a visit.

We visited this monastery on our way from Yerevan to Tbilisi, Georgia. We paid 80 Euros for one full day. 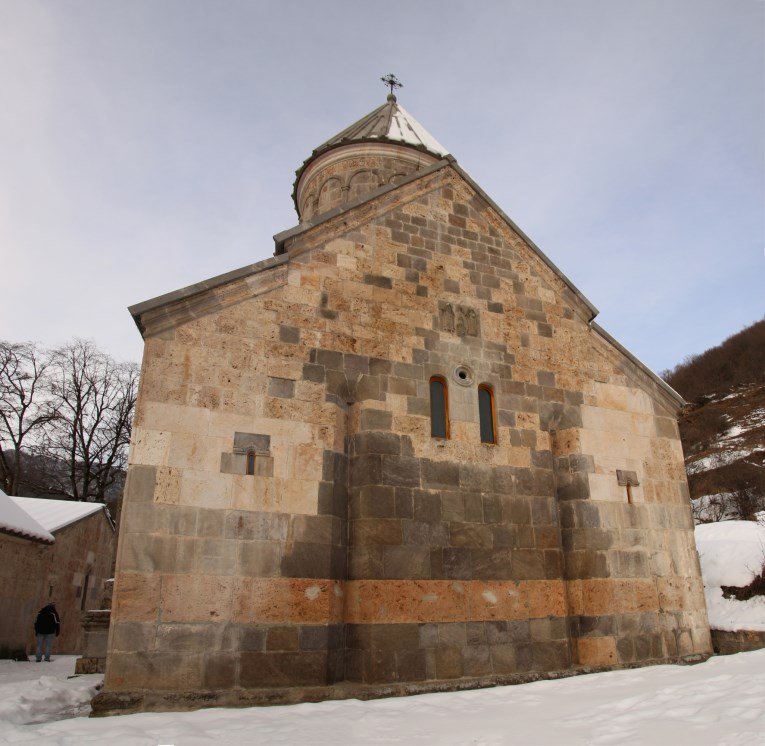 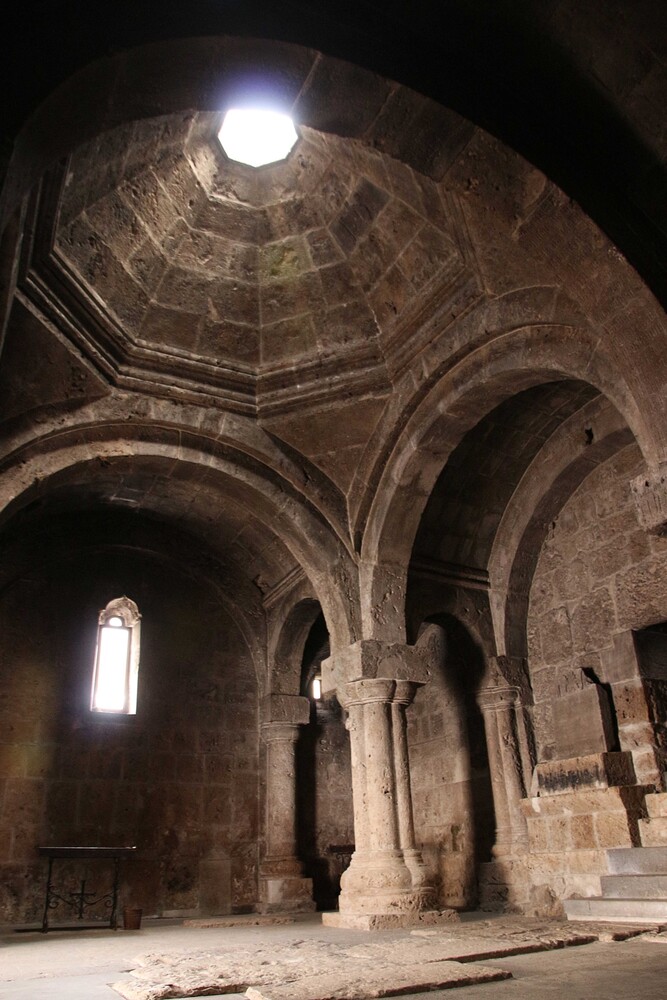 This non functioning religious complex is a 12th century Armenian monastery in the village of Gosh. While I visited this church, it was undergoing some renovation. The setting on the hill, overlooking the village is nice. There are three churches, a school building and a chapel. The interior has some nice facades details and there is a huge dome.

Both Haghartsin and Goshavank are close to each other and both worth a quick visit, especially if you passing by it is worth a stop.

We visited this monastery on our way from Yerevan to Tbilisi, Georgia. We paid 100 Euros for one full day. 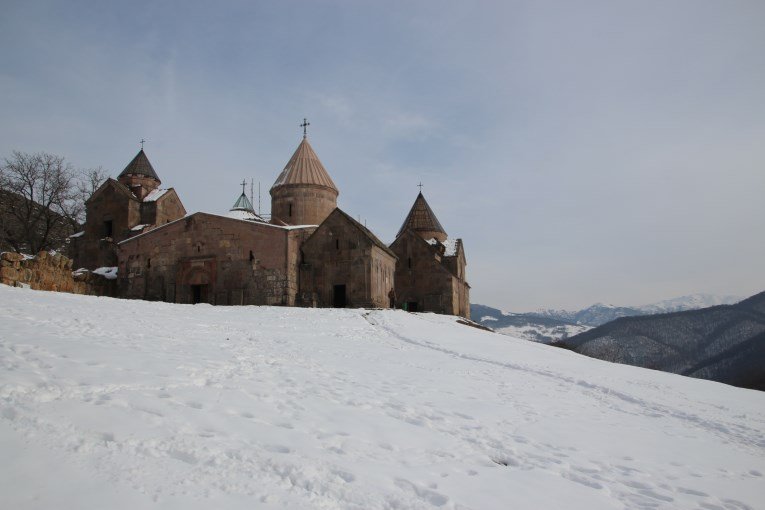 The roads have been icy for the last few days, I’m not sure if you’re going to make it today. Armen is trying to, but if he thinks the road is too dangerous, he will drive back to Yerevan.

The message on whatsapp was clear. A lot of snow has fallen last days and the roads were getting too slippery. Nevertheless, we trusted our driver Armen, who had been a good driver the last few days.

Noravank is a 13th century monastery which is located close to the border of Azerbaijan in the south/west of Armenia.

After a few stops we left the main road and drove between steep hills, covered with snow. The road was covered in a thick layer of snow and snow was still falling down today. Noravank is settled on a mountain, so Armen had to drive really carefully. After the steep road he could park the car and we made it!

The monastery is connected to an artist of the Middle Ages called Momik. He is also buried on this site in a simple grave. 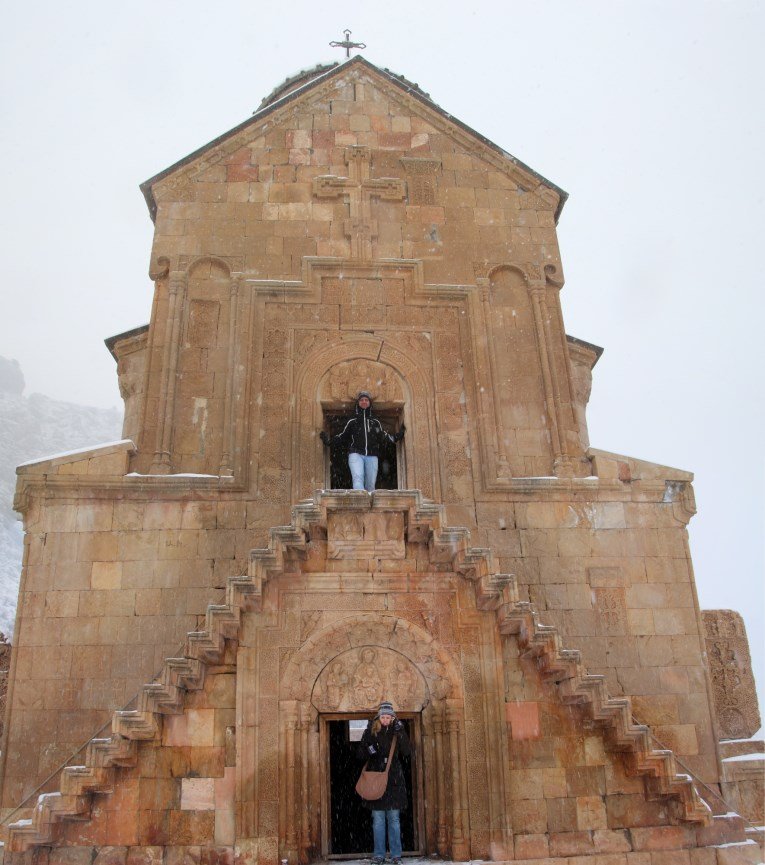 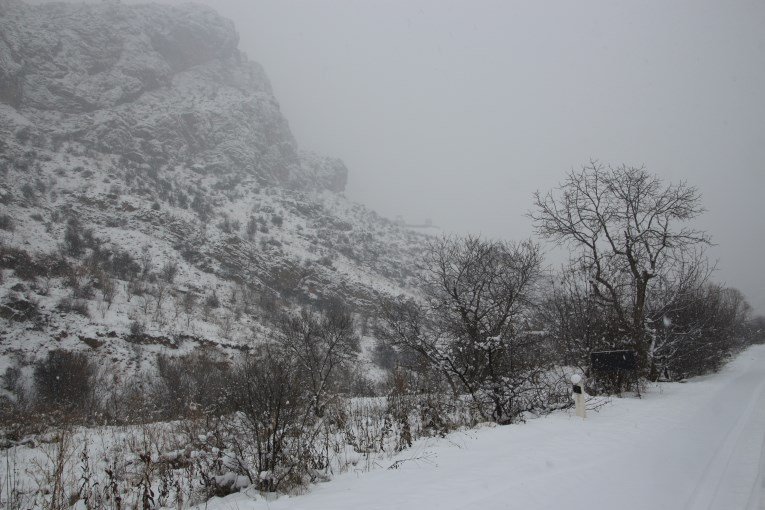 There are a few churches on the site. The main building of the complex is has to levels. The upper level you can reach with a very small stair on the outside of the church. While the stairs was really slippery, we still managed to get to the upper level. Here there was a big dome, with snow falling down the hole in the middle.

I really liked these buildings a lot, with its view and nice detailed work. 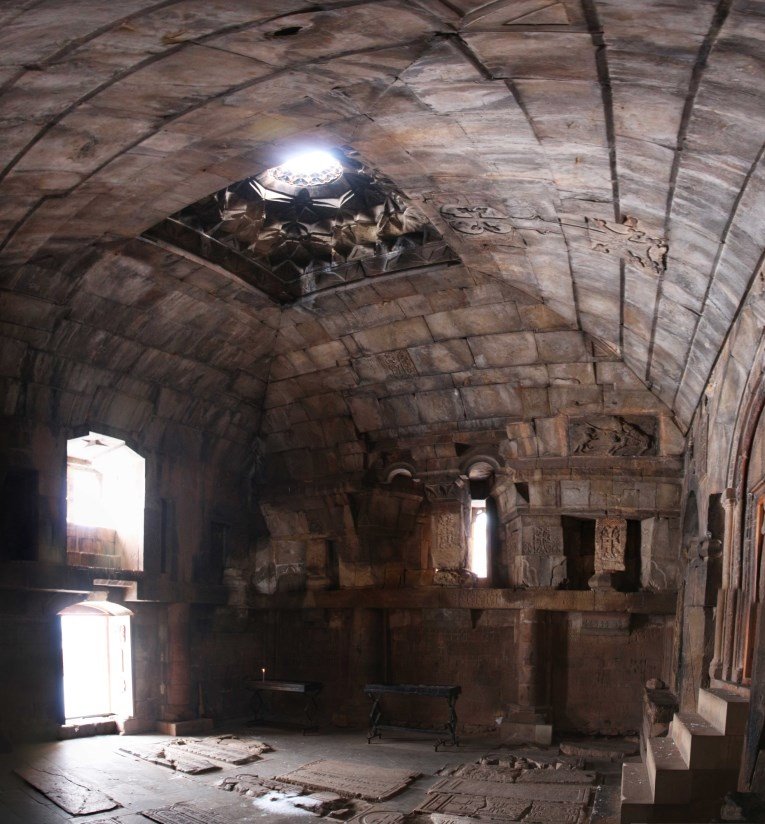 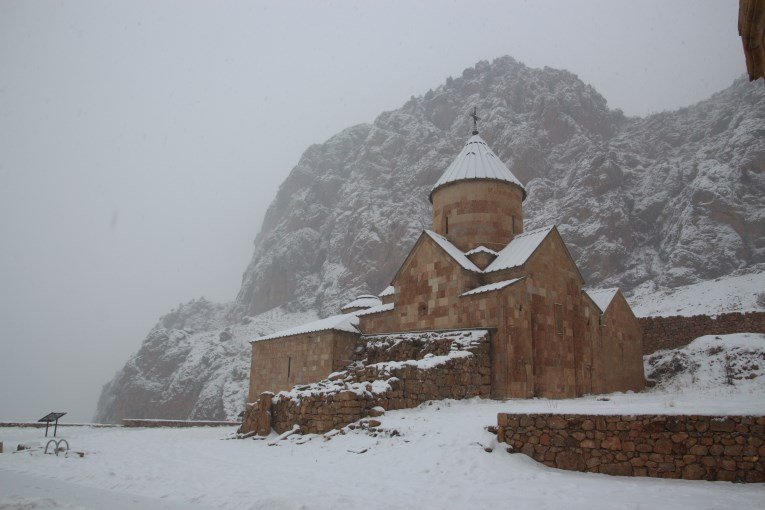 This monastery is 30 kilometers from Yerevan and only 100 meters from the border of Turkey. It is set on a hill and surrounded by vineyards. The best is the view of the

3898 meter mount Ararat, which is actually already in Turkey. There is a large chapel and a smaller chapel. Apparently there are 2 pits which you can go down from a ladder. We only visited one. For us it seemed to be a small church, our guide couldn’t explain to us. Now I know the one we visited was a pit for helping a person in prison for 13 years. The pit is actually 6 meters deep and about 4.5 meter in diameter.

Although this monastery is one of the most visited in Armenia, it wasn’t too busy when we got there. A hand full of people. The setting is very nice, though we didn’t get any glimpse of Mount Ararat as it was snowing that day. 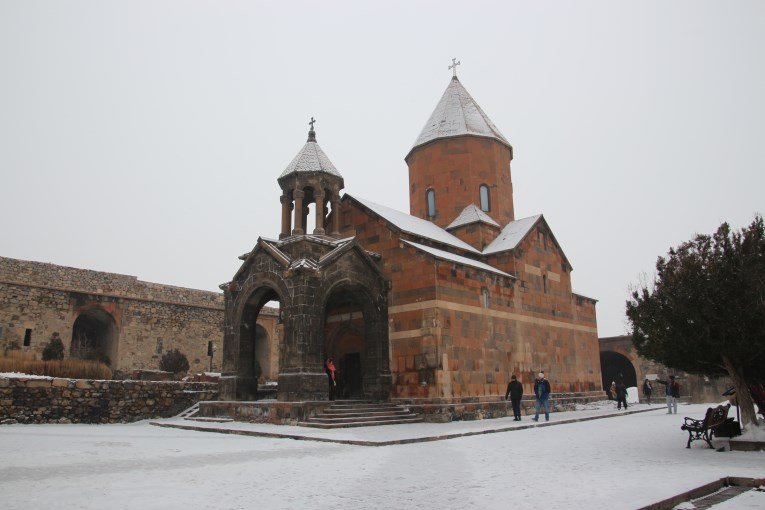 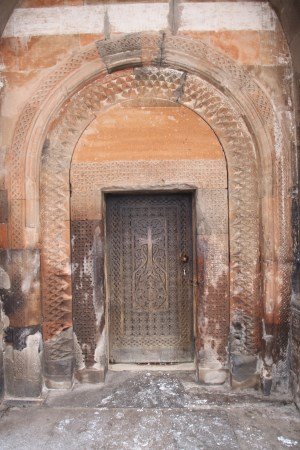 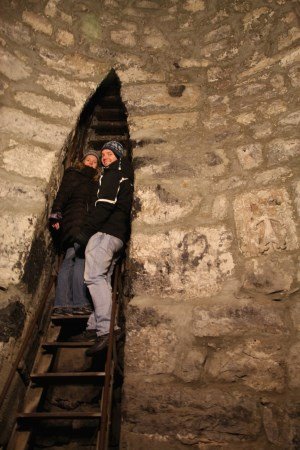 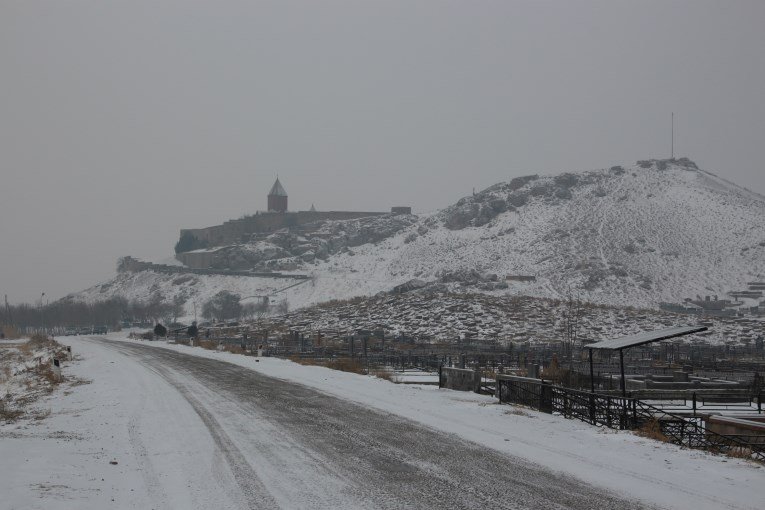 When you see the Temple of Garni for the first time you probably have to think about Romans. The building has pillars all around and it has richly decoration at the top of the pillars. Inside you can find the altar, which you can reach by 9 high steps on a stair.

The view from the back of the building shows the ‘symphony of stones’. This basalt columns are carved out from the wall in the gorge. In Summer you can hike up close and take a closer look.

We paid 25 Euro’s for a half day trip to Garni and Gerhard monastery. A fair price for a really nice half day trip. 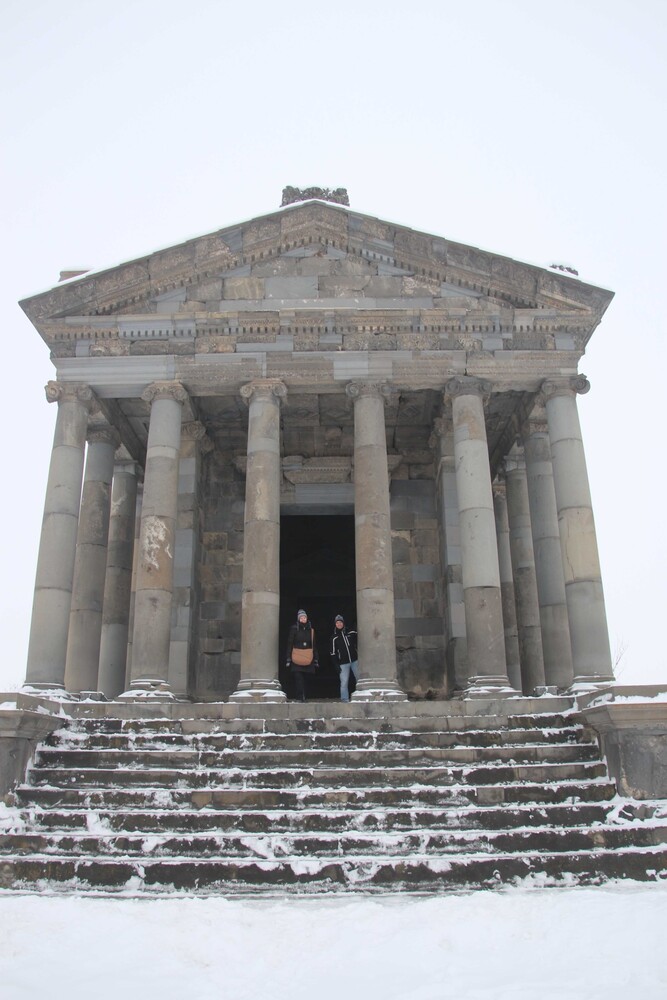 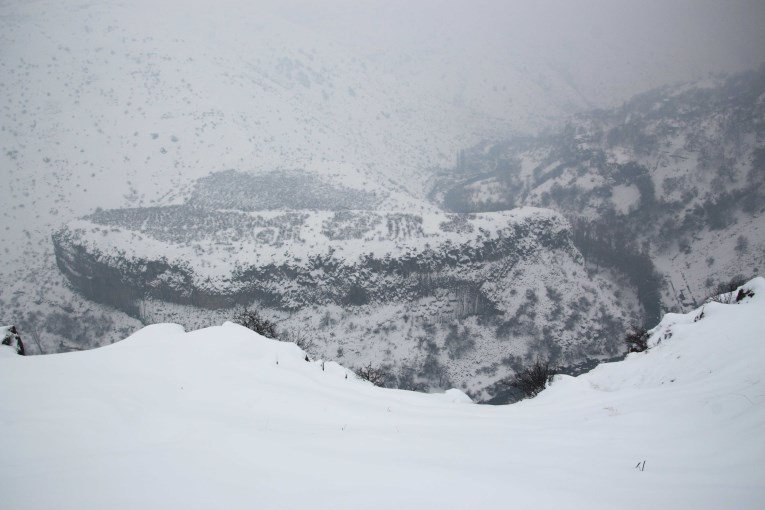 Gerhard monastery was my favorite of all the monasteries we have visited in Armenia. Maybe it was the setting in the upper Azat Valley, surrounded by mountains and trees which was all covered in a thick layer of snow. It looked very ideally.

Gerhard contains a number of churches and tombs which are dated from the 4th tot the 13th century. Originally the Monastery was called Ayrivank (Monastery in the cave) because of it rock-cut construction. 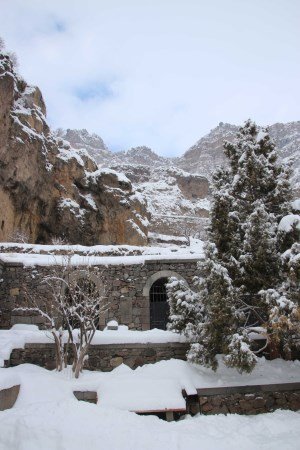 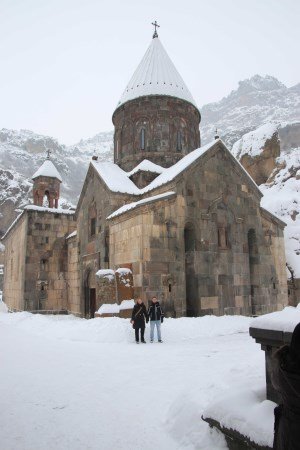 Nowadays it is one of the most visited monasteries of Armenia and it’s on the list of UNESCO heritage sites. Not only the outside is beautiful, inside you can see nicely constructed roofs with very nice light capture in the middle.

Gerhard was my favorite of tall the temples and churches we have seen. Not only I loved the details, the setting on the mountain, covered with snow was just perfect. 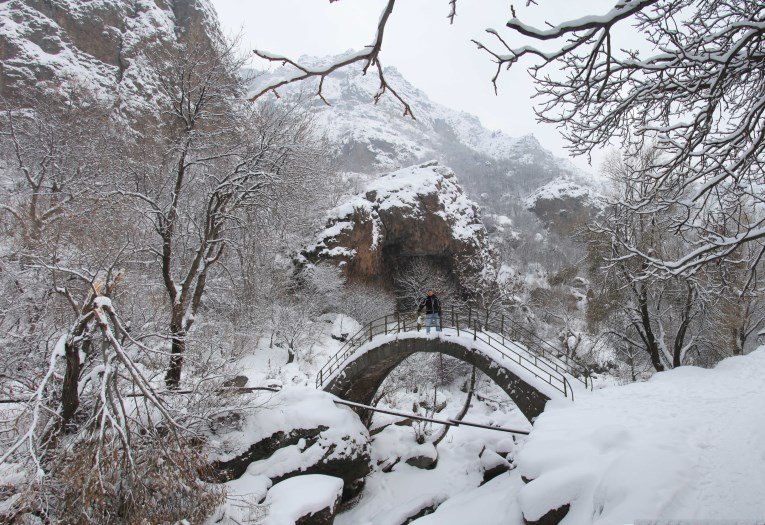 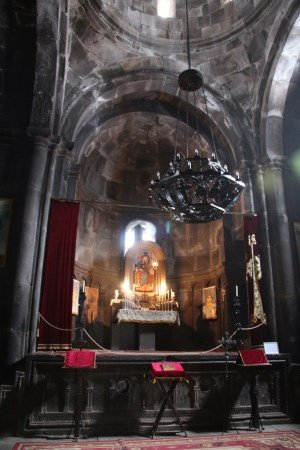 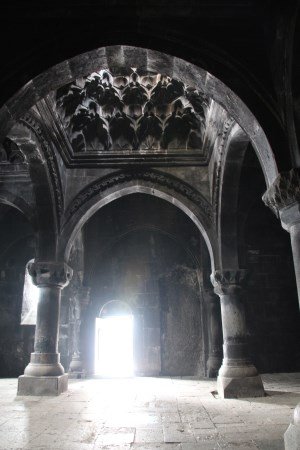 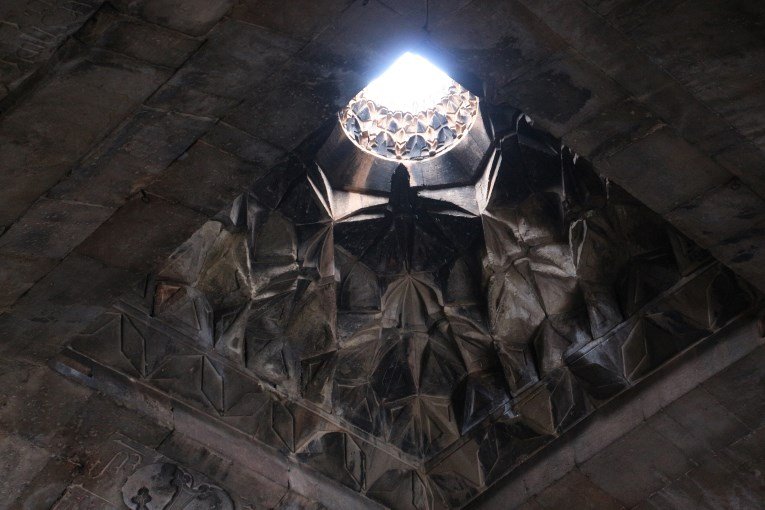 Information about a driver for a day

Via TripAdvisor I have hired a taxi for a day to several sights. I agreed on prices with Aram from TripAdvisor and he would send a driver the next day. The agreement was always good and well informed. Along the way we could have a lunch.

Taxi for 1 day: Yerevan to Tbilisi/Mskheta with several stops along the road. We paid 80 Euros for one full day, with an early start at 7AM. We arrived in Msketha around 5 PM. The taxi is for 3 persons, so you can split the cost.

Taxi for 1 day: Noravank, Etchmizdzin and Khor Virap. We paid 80 Euro’s for a full day with a driver. We made a schedule for the day and the drive would see what he could do according to the weather. It was snowing that day and it had been snowing on previous days so the roads could be too icy. But we made it to Etchmizdzin, Noravank and Khor Virap! I was really pleased with that. We got a small wine tasting tour along the way. And we got to see nice views. Our driver Armen was great and I would hire him again. Unfortunately he doesn’t spoke English, but he really wanted us to see everything and showed us around and tried to explain with hands and feet.

Taxi for a half day; Gerhard monastery and Garni temple. We paid 25 Euros for the taxi. This day the driver was a little late. But due to snowfall it wasn’t too bad. By the time Armen arrived at our hotel the snow stopped and we could enjoy our half day tour. 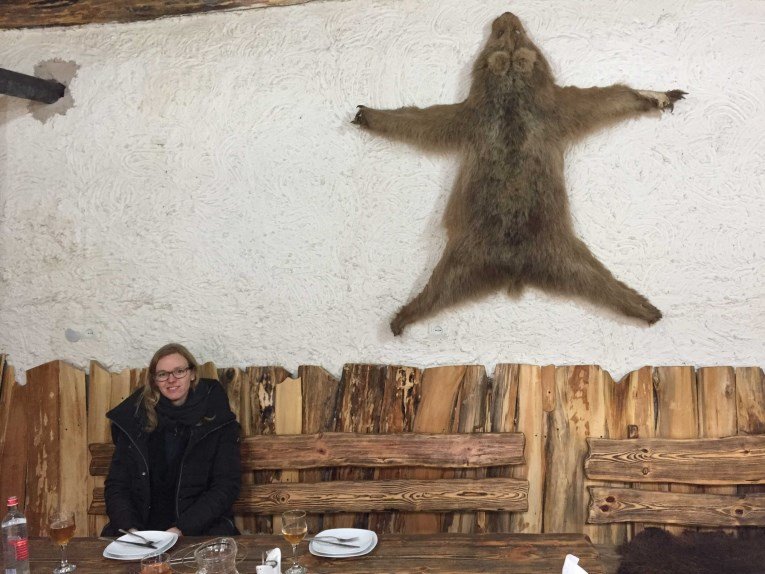 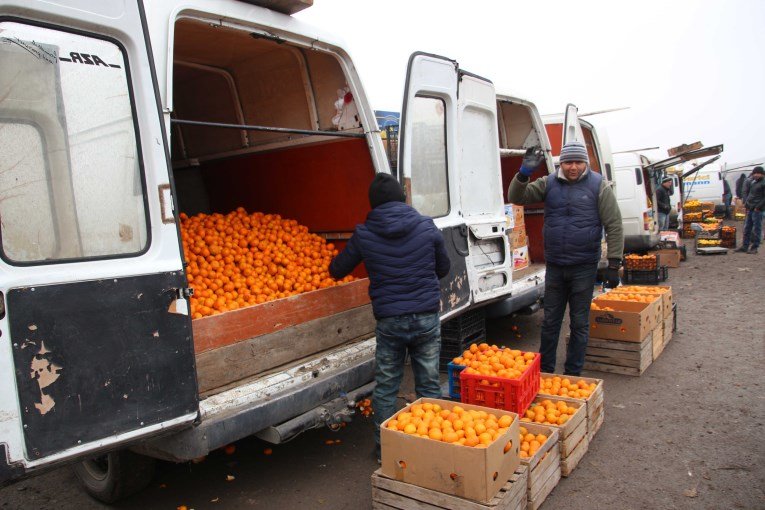